New boss ideas for the game

So, I’ve created super hard boss. It’s called Military supply force. It’s a big chicken which carries two large cannons which shoot eggs very fast at the player. It can also shoot egg missiles which follow player until they hit him or boss. After it’s health drops below 50% it generates force field which deflects all player attacks (including missiles). The boss starts shooting ONLY egg missiles so the player must lead them to hit force field which then closes for few seconds and player must shoot it as fast as he can. 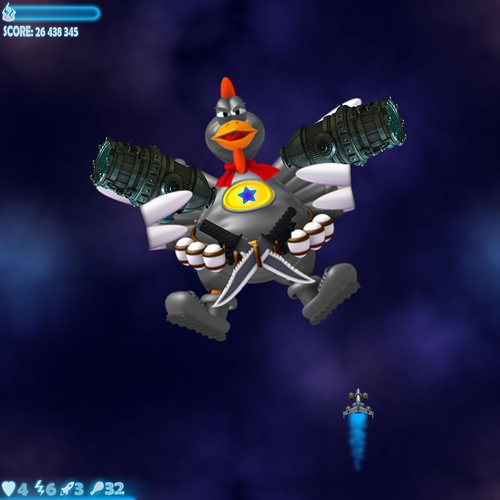 This boss is so insane

Hopefully they include it in the game

There should be more UCOs, with combinations of new and old weapons. Maybe a constantly active beam that requires you to go around the object?

Yes! I have in mind something tht requires you to hide behind asteroids. You’ll see tommorow

Here is another idea. U c o which has something like camera in front and when it flashes the player must hide behind asteroids to avoid instant death. First the u c o fires his regular attacks, but then he enters fhe background so the player can’t hit him and he uses this camera thingy to flash at the player and that instant kills the player. Asteroids are also falling in diagonal direction but those are in the background, also and player must hide behind them when uco is using his flash attack on player. As soon as boss enters the fighting area again the player must avoid his normal lasers again but he can do damage then, just not when uco is in the background.
I got this idea one day when i replyed to @EmeraldPlay s comment saying that why we don’t just instantly kill the player. Then I said that there should be a boss that does that if the player is spotted by him. @InterAction_studios actually liked my post so maybe it has a chance to appear in game.

Hope you like it! Ps. Sorry for my terrible english. 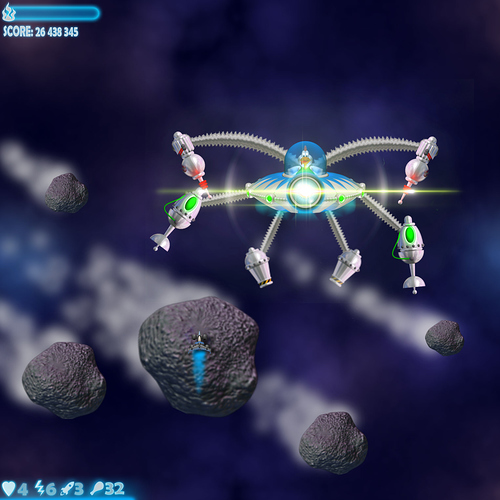 nice idea, or maybe a flashlight-like spreading laser that moves around constantly and you have to avoid it? i’ll maybe post a picture about what i think

Or a laser that constantly chases you slowly?

The boss Is a diehard XD

Hey how did you make this photo?

It’s made in photoshop cc

Hopefully they could include it

This boss is really something i want in the game. Good job!