My idea is based on MMO boss battles found in some online games, where all players online during that time will work together to defeat this huge boss (with much larger health than normal and intended for all players to work together). Chicken Invaders Universe (CIU) is obviously an MMO game, so I’m thinking this might be an interesting feature.

In this section I will describe some general features commonly found in MMO boss battles, before discussing how this should be applied in CIU.

As I said earlier, players online will battle against the boss with extremely high health. However, this boss will only appear for a limited time, usually 60 minutes, and players must defeat it before it “escapes”. The damage that all players deal to it is cumulative, and during the battle, the player usually sees that the boss’s health goes down although the player doesn’t damage them directly, this is because other players are attacking the boss too (I know this is a bit hard to understand).

If a player dies during the battle, they may wait out for (usually) 60 seconds before being able to fight again, or may skip by using the premium currency of the game (why not allowing them to fight again instantly instead?)

When the time expires or when the boss is defeated, whichever comes first, all players join the event receive consolation prizes, while the top players (usually top 10) do highest damage to the boss, as well as the player lands the final attack to kill the boss (if that happens) receive bigger prizes. Some games might also offer prizes to players that deal at least a fixed amount of damage to the boss in different prize levels.

If MMO boss battles in CIU appear in only one timeslot, it will be unfair for some regions around the world because they might not be able to access this feature at all (for example, their bed time). I think the suitable time for an MMO boss fight can be Saturday every week (one day per week is enough), at 0:00, 8:00 AM and 4:00 PM UTC time. Putting three timeslots within 8 hours of each other should be more evenly fair to all players, and fighting at weekend is more suitable because players usually have school or work during weekdays. 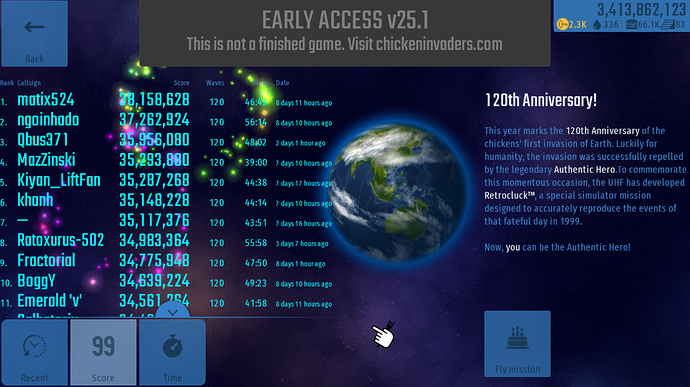 The battle will start for all players at the times above and last for 60 minutes. To access it, the mission access screen can be similar to the 120th Anniversary screen, however: 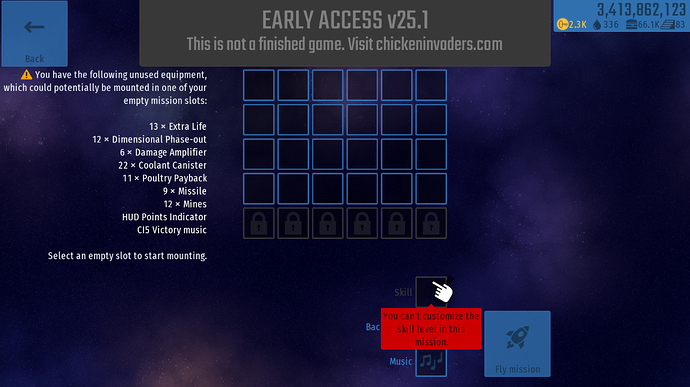 Prepare to battle: It’s not much different between the Mega Boss equipment screen and normal equipment screen, other than again, this is an MMO boss for all players to work together, so the skill level should be locked to Superstar Hero + 100% base difficulty so you can’t customize the skill level. This is the difficulty of the attacks of the boss, because its health has already received an extreme buff. 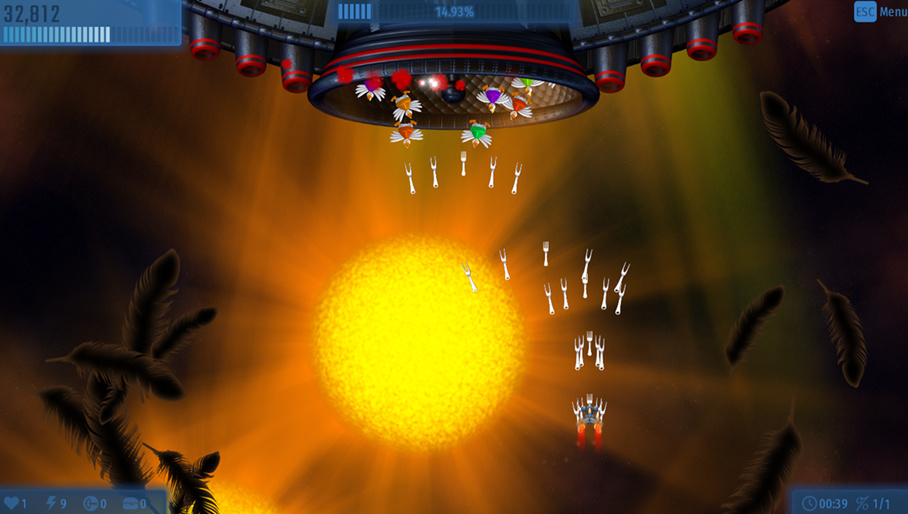 Individual rewards after the event:

(for the Mega Boss, I think it should either be the Yolk-Star™, Egg Cannon or Henterprise as they have advanced attacks),

Given that the Egg Cannon and Henterpriſe ſpawn lots of chickens, I have an important queﬅion: is the individuäl chichen health alſo booﬅed? If not, boooring. If ſo, then this boſs wouldn’t really be implementable until after multiplayer was added (which may not happen at all).

If Egg Cannon is used, it definitely needs modifications as it is too easy compared to the two other bosses, for example, it should always use all 5 attacks back-to-back instead of a new attack after 20%. Henterprise on 100% + SSH is actually quite difficult without losing lives or special weapons, especially the two horiztonal phases. Infinite-spawn chickens don’t need a health boost as they give only 1 point anyway, and they are not that hard to avoid bumping into (as I said above, you continuously gain points equal to the damage you’ve done to the boss).

Ummm…was that really his point? I’d assume that the point is the fact that this attack will literally do nothing with lots of players on the screen if the chickens have the same amount of health as they normally do. It’ll be as if the attack isn’t even there,because all the chickens will get wiped out before they even show up fully on the screen!

At least according to the other online games I’ve played, although all players are trying to reduce the boss’s health together, you will only see yourself on the screen and the boss attacks will always aim for each individual player as they fight (it would be extremely hard to implement otherwise, there can’t be hundreds of players on the screen at the same time). I’ve added this detail in “The gameplay” before “Scoring” section.

It’ll be as if the attack isn’t even there,because all the chickens will get wiped out before they even show up fully on the screen!

Although the mechanic is new, it is intended to be a massive evolution of a known boss fight.

The player that lands the final attack on the boss will receive 50 keys as a bonus.

Because that’s fair for that one person out of hundreds. Also how do you even calculate that?

Just the top 10? JUST THE TOP 10? FOR A 1 HOUR MISSION? This is ridiculous! Why even bother playing this for just losing your lives?
The rewards are so measly for such dedication there’s no point in playing even if you’re number one. But since there’s little people trying, you’re not gonna reach that reward! It’s not like you could play some exciting boss rushes or normal missions, when you can just fight the same boss for 1 straight hour… sounds funnnnnnnnnnnnnnnnn
(Ignore my Moron Railgun runs)

Reminds of an event in a mobile game but instead of all players it is per guild.

Squadron Ops as a new type of event. But no cause I have no squadron yet.

There are “squadron-only challenges” on the list, hopefully it will be added soon (shared boss battle?).