I’ve been thinking of ways to diversify the different special facilities as more than just specialized shops, and I have some ideas for the Heroes Academy!

These are the main ideas that I got. I hope you like them, I put way too much effort into the mockups.
Well, one of them at least.
Do you guys think the different locations should be more than they are now, or is the simplicity of specialized shops perfectly fine? Let me know in the replies.
And as always, thanks for reading!

Nice concept (already suggested) and the game needs something like this

Could you please stop writing in caps for 5 minutes?

Uh-oh, I said the D word.
This has probably been suggested before, but I believe a Chicken Dex would benefit new players and provide more insight on new types of chickens added to the game. The dex would primarily display chickens that you’ve encountered and defeated (multiple times in the case of bosses). Chicken Dex entries would feature the canonical name of the enemy under scrutiny, typical strength (designated in categories of Puny, Weak, Brittle, Resilient, Strong, Hulking and “Uh-oh.”), brief overview of mechanical capability (aka the particular gimmick of the enemy), times defeated, times killed by and similar pointless stats ( a la planet info) and some flavor text, a bio or backstory. Here’s a mockup. 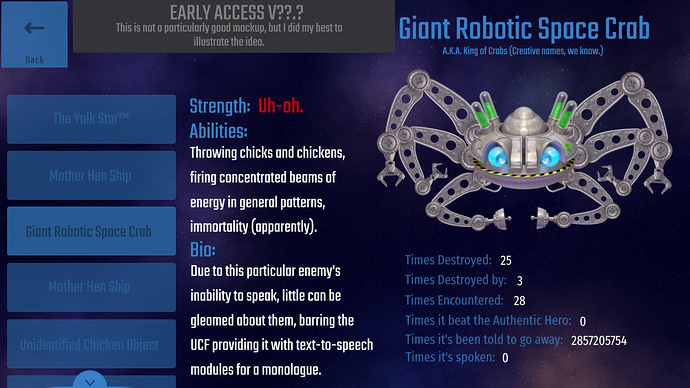 You fire your weapon a lot more than you realize, you know! And even then, I imagine it’d be easy to farm shots if you really wanted it done, especially with Overdrive now in the game.