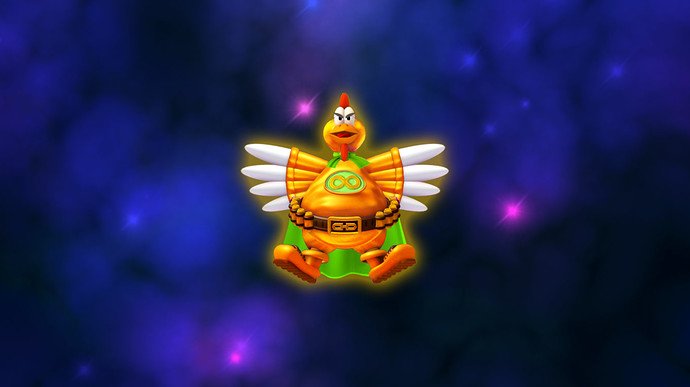 Golden Infinity is a regular semi-special boss that is an alternative variant of Twice Infinity. This boss only appear in boss rushes and key rush (as a boss)

Golden Infinity is an infini-chick wearing a golden jumpsuit. It doesn’t go with his brother because he’s their brother-in-law. He has a health of 175% of a normal inifini chick.

The wave name is Hendas Touch. The screen Zoom out by 150% 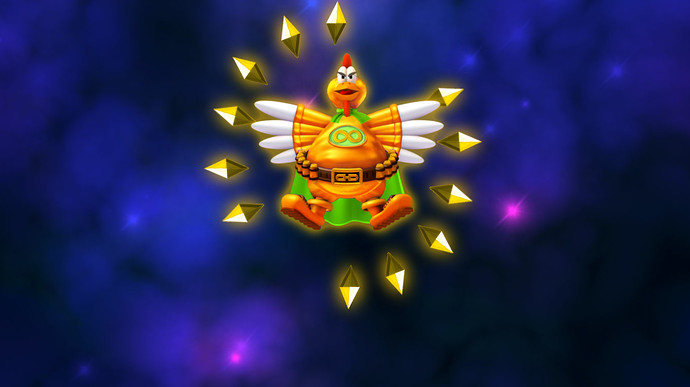 When starts the wave, GI will instantly use the spiral barrage, no charges. He will also attack when in mid-battle. The spiral barrage refer to the twice infinity’s spiral fiery. 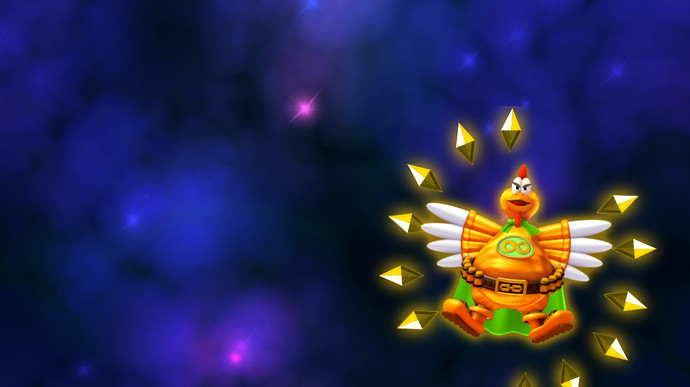 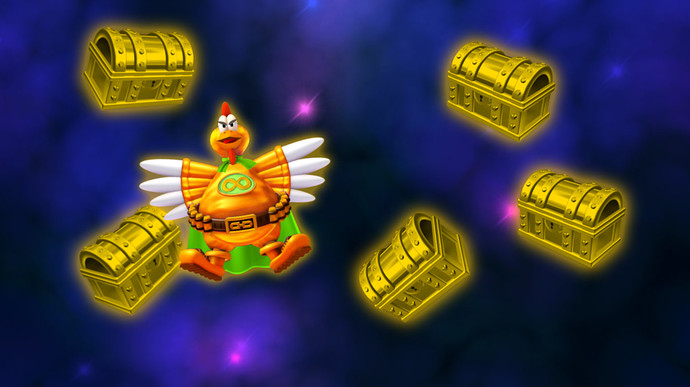 GI will summon a storm of Giant golden Treasure Chests. They’re pointless but will drop coins occasionally (completely forbidden in competitive). If only over 110%, chests will appear from 2 directions. 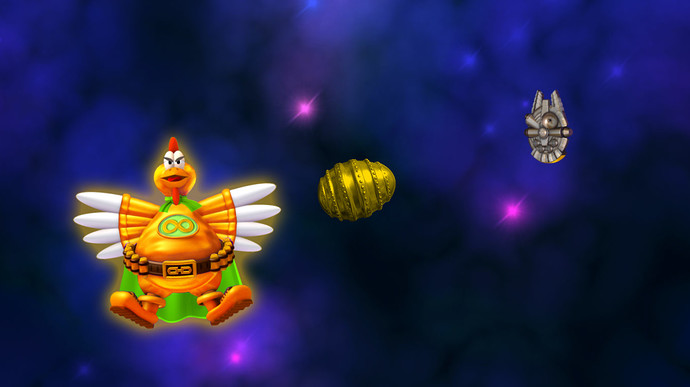 GI will fire a golden egg at you, after it reaches where you at, it’ll explode and split into 6 smaller golden eggs. 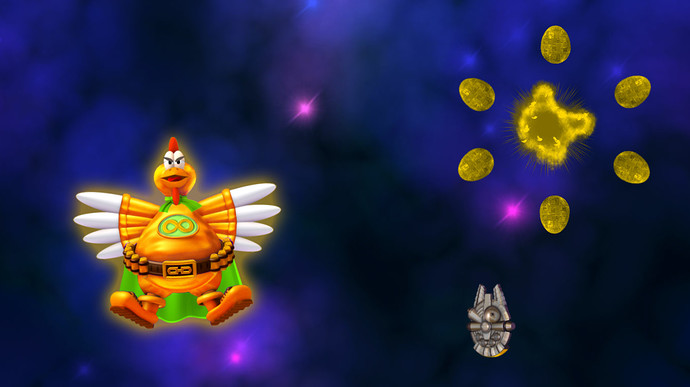 Thx @Darth_Skembesion for the explosion btw 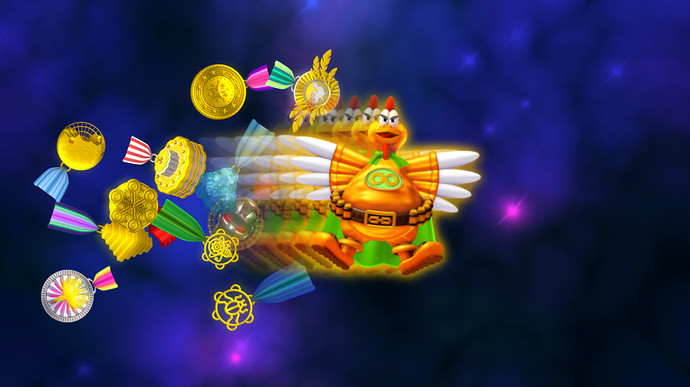 The medal is lethal but not the silk one or whatever it calls (only the main part of the medal). Trophies will not count as medal.

DEATH DROPS:
Golden Infinity will drop both foods and coins upon death. They all take the value from the regular bosses.

In Double Team, he is 10% bigger than infini-chick, he will never perform medal throw here.

Well this is a Midas Touch. No, there’s no mocking or hate here. Criticism is indeed cool and I will go now. Goodbye.

Golden Infinity: @Darth_Skembesion
Medals and most of the textures: iA

dissing aside this is actually quite a good idea

So in a nutshell, you’re suggesting a boss that is to Key Rushes what Feather Brain is to Feather Fields?

I actually really like the core concept. The visual design is a simple yet nice recolour. I’d be happy to see something like this.

Some nitpicks and ideas on the specifics:

I think it’d be cooler if it had a key on the suit (although that would require a new sprite, whereas what you’re suggesting might potentially be possible with recolours, saving file size.

I think “Midas’ Clutch” or even “Midas’ Cluck” is a bit more fluent. In any case, it grammatically needs an apostrophe.

Like the move, I think the sprite could be a bit nicer but it’s not too important.

Not a huge fan - I think it would look like a pretty messy re-usage of sprites in practice. Also, I know I would not want to have to code making the ribbon non-collision on all of the sprites, and I doubt iA feels differently.

Additional Ideas:
Well, for one thing, it would be cool if he dropped “Golden Eggs” (think like Super-Chicken’s attack) which work like normal eggs, except they fall faster and drop coins when they splat at the bottom of the screen. Given that’s now two moves that can spawn coins, maybe the fight should just have a hard limiter (nothing too high) on how many coins can be dropped before it refuses to award any more - that way everyone gets a fair chance to collect them.

I think it would be a missed opportunity not to have a Golden Egg somewhere. If not the above, then perhaps the fight begins with a giant gold egg that hatches (into the spiral-attack move) after a set time, but before it does so you can shoot it like crazy and it will spew coins everywhere.

And finally - if we’re going to call him Midas - give him a turning to gold attack. Have chicks occasionally get summoned onto the screen and fly around for a bit, then suddenly he turns them to gold with a pulse and they all drop like rocks, so you have to be careful not to hang around underneath them.

might potentially be possible with recolours, saving file size.

If it was possible, we would have coloured lightnings in planets.

Magnetic Manipulator got the helmet and asteroids recolored (albeit not fantastically).

The helmet is not recoloured, it is blended with other colour (it’s also called “modulation”). Asteroids are a separate texture.

This should become the 4th Final Boss.

Well, for one thing, it would be cool if he dropped “Golden Eggs”

Heck, I forgot to make that

Not a huge fan - I think it would look like a pretty messy re-usage of sprites in practice. Also, I know I would not want to have to code making the ribbon non-collision on all of the sprites, and I doubt iA feels differently

Always have backup, I have an alternative where he throws out gold bars (will make)

key on the suit 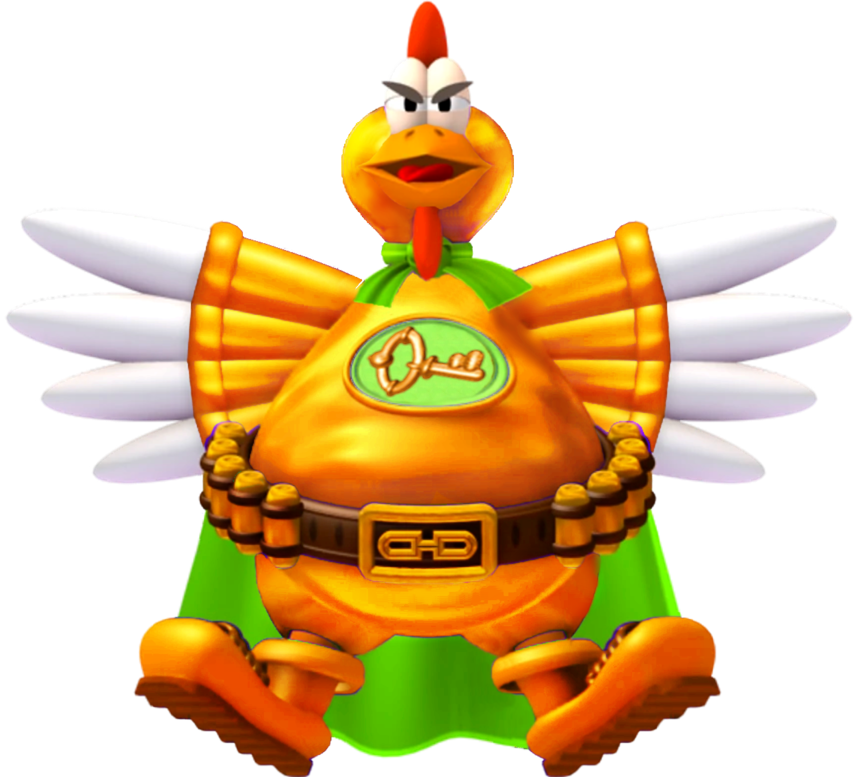 This is suitable in Key Rush

Added another attack, buffed an attack and explained more clearly.

I do not get the joke, but the move itself is cool. Kind of prefer it just being a pure gold egg, but that’s pretty subjective.

You mad lad you actually did it, love it

Yes, this will be the best boss in the game if added by IA

Good stuff. This’ll be a fun boss to fight if it was in the game