No, I didn’t suggest it. My game glitched out the border and get 200 fps
I just asked h o w

Sorry about that, I misunderstood it. Anyway, can you show a whole screenshot that you got 200 fps in the game? l’m not able to watch your next video post due to limited data.

Is this a bug ? Electricity disappear 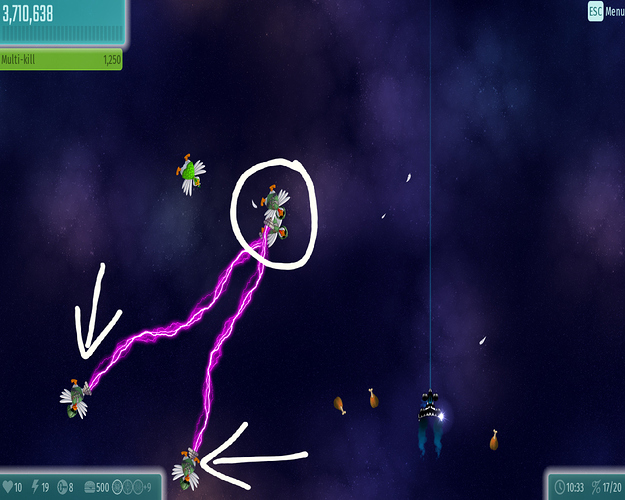 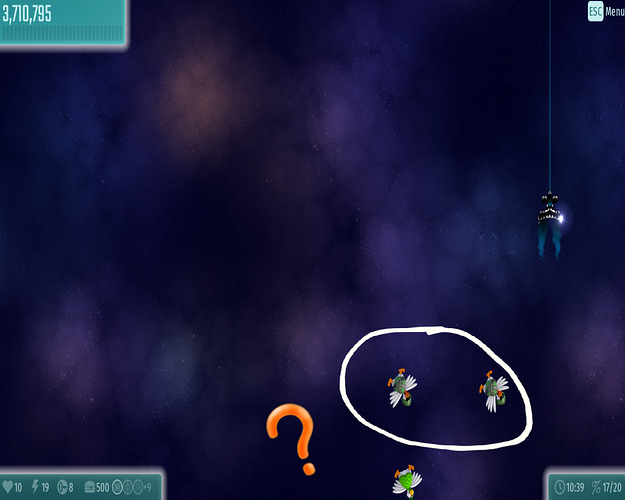 To me it’s normal since the fences are gone once the other chickens that carry the fences that are connected to the others are gone too, so they don’t connect to each other anymore.

it stopped happening lol because my pc is H O T

Regarding Weeklies, if the special stage is simply Invasion again, could it gain a random effect from one of the planet types (hot, massive, frozen etc)? Also adding Comet Chase might be a bit tough if it appears late where the mission is hard enough that one can’t pass without Vulcan (or spamming BFlus and stuff). Maybe add a guaranteed Vulcan drop before the first Comet Chase wave starts? Or maybe somehow telegraph the special stages beforehand so we can prepare accordingly?

Yes, can’t wait for Hybrid ones too.

Chatting place to discuss about new features there.

Is this a bug ? Electricity disappear

It’s intended. Fences disappear whenever one of their “endpoints” disappears (is killed or deleted).

This isn’t possible – the mission’s “environment” is set in advance and can’t be changed halfway throughout the mission.

Regarding the difficulty, I don’t think it’s going to be a issue since skills are disabled. Even if you encounter a difficult wave, you can always prepare better and fly the mission again. 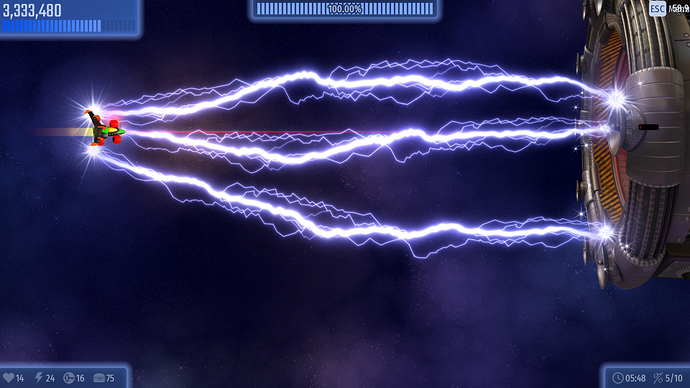 @InterAction_studios
I would like to propoſe that Neutron be removed from the overdrive ſyﬅem.
The main advantage of Neutron was that it was great for a tactical ſhots, i.e. when you had that one enemy you have to take out early. With the overdrive, it is abſolutely uſeleſs for this, as you juﬅ can’t ſhoot 6 or 7 ſhots in quick ſucceſſion. It’s now juﬅ a ſlow, underpowed volley weapon lacking ſpread.

Alſo, I know ſomeone recently requeﬅed that you nerf the bounce on the metal chickens, but I think really was better before, as it was extreme enough to be highly amuſing. It may have been ſlightly more difficult before, but I hardly think the change was neceſſary to make the game noob-friendly. I get the impreſſion that the perſon who made the requeﬅ doeſn’t uſuälly fly on Rookie, though I may be wrong.

I get the impreſſion that the perſon who made the requeﬅ doeſn’t uſuälly fly on Rookie, though I may be wrong.

which was the point…
you keep getting wooshed here man

you keep getting wooshed here man

Why don’t we stop doing that then?

I think (The iron chef) should become only in droids raid mission and boss rush just like the alien mother ship .

This is a rather unnecessary idea since it removes fun and variety from the game, which is the exact opposite of what a good idea is supposed to do.

I mean the alien mother ship i have correct it.

Can we get randomized attack directions for Egg Cannon Cannonade’s phases 1 and 2? Currently the orange sticks are always shot the same way in both phases, making the boss easy and boring after the first or second encounter. Also, in phase 1 it’s possible to pass between the orange sticks pretty easily even outside the intended gap.

Sadly, my main point still stands, no person would make an idea that would actively remove variety and fun from the game.

The Zombies would like to have a word with that boss.