A new enemy breed: Phoenix Chicken! This is the counterpart of the “Chiller” chicken introduced in the previous update. Its attack is non-lethal, but you really don’t want to get hit. Due to its nature, it has -50% reduced spawn probability in frozen environments, and +50% in hot ones.

Also, customizable food drops! Instead of the regular burgers, you can now set enemies to drop Sweets, Fried Chicken, Fruits, Pizza, Popcorn, and possibly another one I forgot to mention

There will be another update at the end of July. Following that, and barring any major issues, updates will slow down or even cease during August.

can the cuisine be randomised if you put more then one option in? 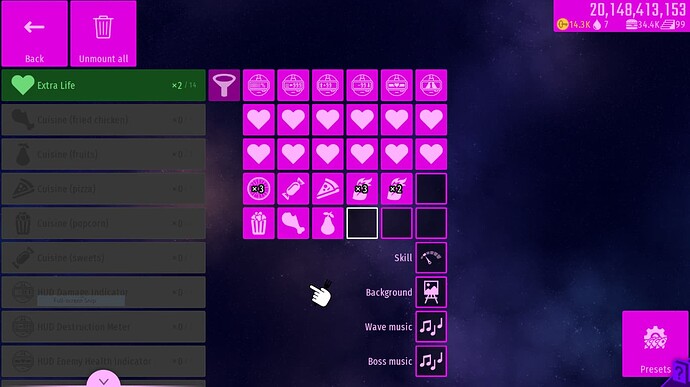 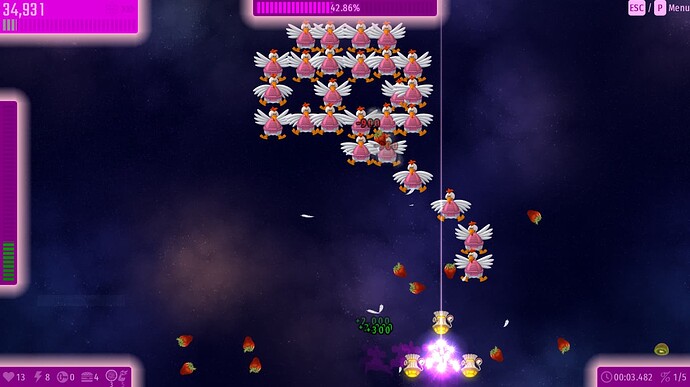 Hey. Will you add a button to review previous mission run stats? Like, after you finish your run you see the scores, %-ages, Medals and keys.

If you want to attempt the mission again, there could be a button to show that screen again, just to give an idea of how well you can perform and what odd percentages were at play. If possible, make it so you can see it as well for Weekly Challenge or other missions that can be re-attempted from the notification menu.

Currently, the last one (going left-to-right and top-to-bottom) overrides all previous ones. I might make it choose randomly, though.

“Visitors from Another Dimension”, “Terminator Chickens”, “Gyroscope Malfunction”, “Backup Droid Patrol” waves now have 4 danger zones (one on each side of the screen)

I think you forgot the wave: “Look In All Direction”

Could the cuisine items be bought In the space burger? It would fit… 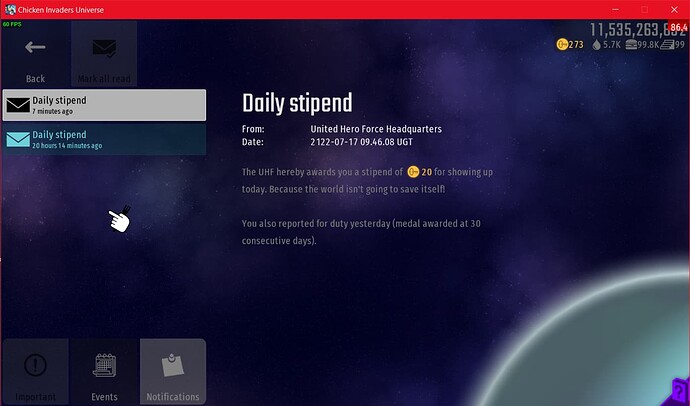 Now that we have customizable food, how about customizable coins too ?
Golden nuggets, dollars, gems or even four leaf clovers as an example.

Could the cuisine items be bought In the space burger? It would fit…

I would agree but with lower prices instead. let the original cost be in the galactic store.

Daily stipened is your log in game once a day. the time between both messages is very long.

i thought that the below may deleted but not

I second that. Make it random.

i think i haven’t read that lol

Hey IA, since the poll in the following post shows 70% agreeing to my idea, I’d like to know what you think about it?

Well, gonna make this poll since the Chiller breed looks too much like the Sweater Chicken from the ‘‘It Gets Cold In Space’’ boss fight:

Should the ‘‘It Gets Cold In Space’’ boss have an icy appearance, just like the Chillers, in cold environment missions?

Also, could you make the score star bronze if you rank 3, silver for rank 2, and gold for rank 1? 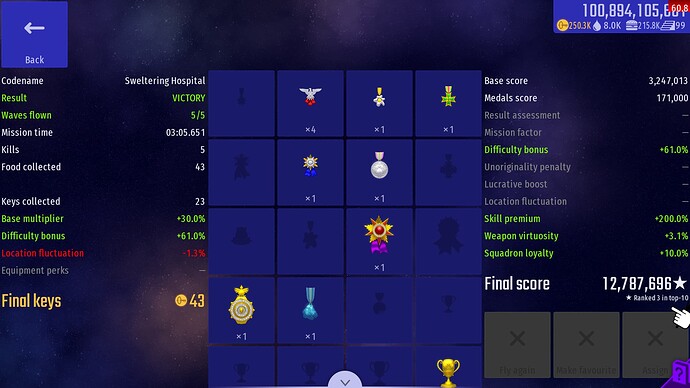 And last but not least, if it’s not the case yet, can you make the Chiller weak against fire satellites, and the Phoenix strong against them? I know, it might be a bit of a silly suggestion, but it’s best asking than never asking, right?

How about make custom chickens available too? Then we can solve the demands for holiday editions. Just make all of them available to buy, you can set any holiday mood you want. Might be better than forcing themes and then remove after the holidays.

Of course, it may not be simple to add it soon. But it can be considered in the long run.

Can you make cuisine’s illustrating images show how the new food align with the original food? They might be a bit confusing with some players not familiar with them yet.

i noticed that phoenix fireballs cause overheat even on corn shotgun, and i was wondering if that’s intentional

I’m guessing it is. Otherwise, Phoenix Chickens would be much more harmless against players who use the Corn Shotgun.