There will be “aimer” and “shooter” one. Both of them have same colour diode. When aimer sees you, he will send signal to shooter with his colour(both diodes blinks 1 time, like egg drones). After this blink shooter will charge the weapon 0.5 second before fire without dotted line so you need to notice him. His fire looks like orange boron railgun with a bit thicker bullet. He will shoot 1 bullet to you with speed enough to notice and avoid but fast at the same time. There will be a wave “Sniper crew” which contains them. 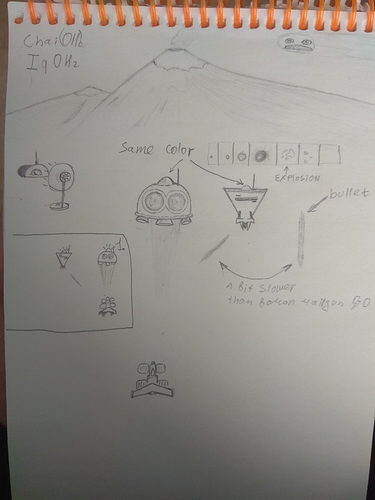 There is a half transparent yellow pointer under the aimer. It becomes red when he detects you.
“Animation” thing is animation of charging weapon. Just smaller and faster mine animation with different sound. When you destroy aimer, his shooter will shoot randomly near you trying to kill you without knowledge of your exact position every 3 seconds so don’t relax.

If you killed shooter, aimer will disturb you with fast blinking and repeated sound.