As people have been suffered from this blue chicken or should I say, the Devil himself, I made this topic just for it.

I will give some cowards behavior both past and now:

When introduced they’re completely scared of you, they ran away from you. If you fire on them, they poop where their butt is.

1st rework more than a fix, they now shoot at you when you attack them.

2nd rework they now only run away from you if you shoot them and return after 3 seconds, they shoot at the opposite direction of where you’re traveling. Plus, they’re confusing as hell when they’re on running away mode.

Now the cowards can be easily cheesed with any 1 hit weapons, especially plasma rifle until this rework:

Reworked Cowards: Now retaliate immediately upon being damaged (even by one-hit-kill weapons), never retaliate while they’re in evade mode (3 seconds)

This brings back the balance of all weapons, they can now easily kill with any weapons but there’s a problem. If you play bomber and there is a coward and your bomber are near and you’re using an instant-hit weapons and require close-combat or smth like this: 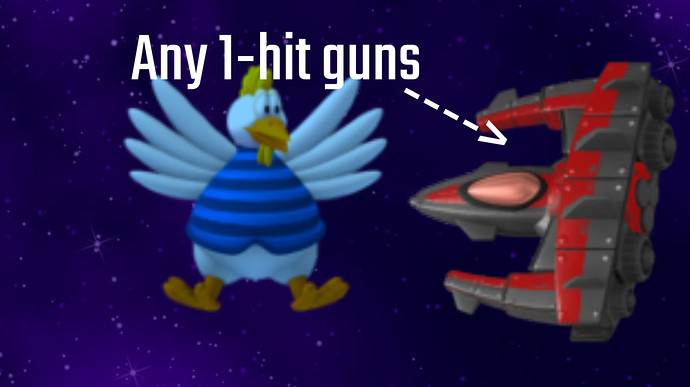 You’ll most likely went up in flames, even more guarantee if it’s ironman.

Now, I don’t really have anything to rework. I tried both making it easier and harder like shoot random locations, delay before shooting, etc. But it makes it RNG-based, impossible and trivializing the chicken. So yeah, discuss stuff here.

Perhaps they just need to bank in the direction they’re moving so you know where their poop will be aimed at.

But my thought on my rework proposal is this: Plasma could cheese them, yes, and it made plasma TOO good as they will not trigger cowards. However, every other weapon would force them to uncontrollably shit all over the place. So, the change is essentially making all the weapons have the same feel. If you hit them, they will fight back. If they’re running away, they will not fight back, so that other weapons that are not Plasma can at least have a better time killing them.

After all, if you can complain about plasma still getting a shot back, why are you not complaining about Laser Cannon or Riddler? It’s just downright stupid and shows that everyone complaining about it just wants an incredibly overpowered and no-skill weapon to win. Seriously, like, come on. TRY a little.

Yes, I’m aware that I’m a plasma main, but I constantly switch weapons during missions, so I know how other weapons can do against cowards, and overall, it’s a lot more tame since you can just quickly kill them before they calm down. If you get in a situation where the coward manages to calm down before you kill it, then I’m not sure what the heck you were doing to let them calm down.

why are you not complaining about Laser Cannon or Riddler?

Shoot, I forgot too add them

I’d like to point out that a full-charged Absolver, plasma’s AoE, the bomb, and bflu/icbm’s AoE still don’t make the cowards poop

Perhaps delay retaliation by 0.5 sec? That would open up some strategic possibilities (especially if they don’t aim at where you are now, but where you were 0.5 secs ago).

Hmmm, I guess that could work

That’s what in my mind but then…insta kill guns

I think that would confuse new players more. They’d think they’re safe, and then run back under and get slapped with poop. But then again, it’s a “die once and learn forever”.

EDIT: Nevermind. I forgot that they’ll move away first AND THEN shoot. I’m cool with this change. Perhaps just a 0.33s will do. 0.5s puts them too far away from the player for them to actually be lethal.
However, isn’t this change going to make them cheesable? (Kill them before they even shoot)

It’s a good idea. And I think instead of random direction, it’s better to randomize whether the coward shoot back or not (like the major of units), or no randomness at all (like toxic chicken and berserk chicken). I think putting RNG on the wave formations instead of the units is a better game designing. A suggestion on how it be implemented: The waste can be shot after the die animation/effect and the delay time and player position reading time is equal to that animation time.

Kill them before they even shoot

Hmm, yes, I overlooked that part. It wouldn’t help with one-hit-kill weapons.

I could make them only vulnerable while they’re fleeing. So you would have to hit them once to trigger fleeing (no damage would be taken at this point), then a second time to damage/kill them. Although that’s kind of a weird mechanic, and one what would be better suited to a different (new?) type of enemy.

That sounds a bit complex, in my opinion this would be better:

Perhaps delay retaliation by 0.5 sec? That would open up some strategic possibilities (especially if they don’t aim at where you are now, but where you were 0.5 secs ago).

tbh I’d remove Cowards from close quarter conditions entirely and have toxics spawn in their place, since toxics are better suited for close quarters while cowards are more a distant sniper type.

Does this happen with Slobs too?

So there’s a chance I’m screwed at Wormhole then, lol.

So I reverted everything and added a new Balloon breed to the elite tier instead. That will dilute the Cowards appearance from 50% to 33% (which is I believe is what @Stardrone is talking about here: Early Access version 62 )

But, if you’re in a bomber and you shoot a Coward point-blank then, yes, you’re still screwed. So try not to do that

if you’re in a bomber and you shoot a Coward point-blank then, yes, you’re still screwed.

Not really. I’ve experimented and if you’re good/quick enough you can still survive

(which is I believe is what @Stardrone is talking about here: Early Access version 62 )

Yes, it’s what I was talking about