Have you noticed how the fryer gets bigger as it travles? How about it getting ablittle itty bitty stronger while doing that!

That’s not how electricity works

Yep. So it gets weaker? Because that is how electricity works.

I don’t think “realism” should influence gameplay design at all. Especially in game like CIU.

Dealing more damage at the distance sounds interesting, but I don’t think it fits Lightning Fryer all that well.

Update: When working on my summary post I noticed that Positron Stream is still kind of weak on latest power levels. So I decided to change that and give slightly more power to its 10

, so it isn’t as significantly behind all other weapons. The new value is only 1000 more DPS on 20

, so it’s not that big of a deal, but I think I had to adress that in some way.

Original post was edited. I will not edit the comparison chart that is on all other posts though. Too much work for something not so important. However, updated chart will appear in the summary post .

Bit of a bump, but I’ve been thinking about Lightning Fryer lately, and I think I may have some alternate suggestions regarding its balancing.

The changes I’m proposing here were made with the current chaining system in mind, and with the assumption that this system will stay in the game (which may very well not be the case). So let’s talk about that first.

The way chaining works right now is based on the bolt bouncing off of an enemy at just the right angle to hit another enemy. Which requires either precise aiming or luck, and sometimes can’t occur at all. One way to overcome this is to just have more bolts (the more bolts you have, the higher the odds that one will bounce successfully). And so, bombers are generally more effective than fighters when it comes to chaining alone.

Another thing to consider is @1galbatorix1’s initial idea of bosses taking the full DPS due to chaining. This may end up being problematic to balance, especially since the proposed 18000 DPS is quite a lot for an instant-hit auto-targered weapon (though it’d be more acceptable if DPS was lowered to around 16000, provided that chaining would also be made easier to make sure that that 16000 DPS can be reached on regular waves as well).

And so, I’d like to suggest another power progression for the Lightning Fryer, one that focuses mainly on gaining more bolts more quickly. One bolt on

To avoid massive jumps in damage output, transitions that increase the number of bolts would have to weaken the individual bolts as well (just like the current transition to

6 does). So with this approach, we’d sacrafice single-hit damage in exchange for spreading out the still rising overall damage output across more enemies.
With such a progression, bombers would reach 6 bolts at

I considered several versions, and I think this is the best one I’ve come up with:

In my opinion, 10-12k DPS is the lower limit of what could be considered useful. Bosses would still take a pretty long time, but wouldn’t be tedious to battle. The issue is that with such values, we reach a maximum DPS of over 22k. Which is a lot.

That being said, I think that if the current chaining system remains largely unchanged, it wouldn’t really be overkill. It’s currently quite rare to reach the chaining limit, and even if it is reached, it’s for a very short amount of time. Alternatively, the system could be made a bit more forgiving but with reduced damage (via reducing the max amount of chained enemies and/or damage dealt to each next enemy in the chain).

As far as problem #3 (bolt width not being consistent with damage) is concerned, it should be simple enough to fix. Just make the bolt’s thickness tied directly to its damage.

Well done, but wouldn’t it be hard to see if there are way too many bolts on the screen? Lightning Fryer would get a similar issue to Photon Swarm’s, Laser Cannon’s and Positron Stream’s.

It already has that issue tbh.

Perhaps, but I doubt it could get much worse than it is already. Well, at least not with fighters. 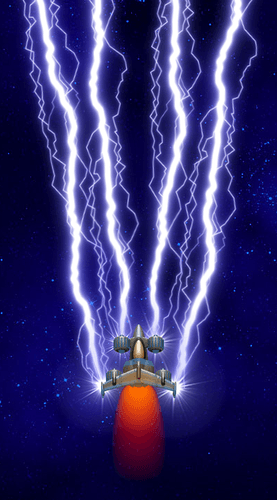 I admit bombers are a bit… much. Perhaps it could be salvaged with a visual rework of some sort. 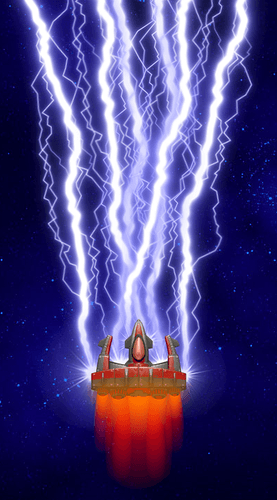 But how can we make electricity transparent?

I guess a possible solution would be to make it glow less or in a darker color. I’ll try experimenting with the textures and I’ll come back with results in a little bit.

Sorry, I kind of forgot I posted this! And yes, I’m usually this distracted. I kept forgetting about it even after seeing my previous post several times. Ah, how “amazing” the mind of a… Sufi? Is.

With that aside, I decided to draw a few eggs and place 6 LF bolts on a black canvas to see if it would be hard to see through them. Now, I know that nowhere in their post did GgWw1175 say “Oh, I absolutely want 6 bolts at FP20”, but I think making everything visible even with that many bolts would be a massive improvement.

Let’s start by taking a look at what six bolts would look like with LF’s current texture: 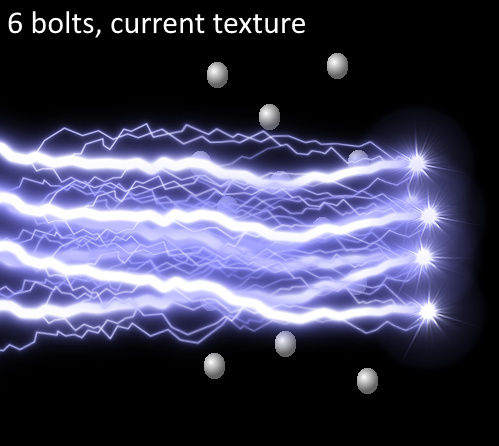 I decided not to make each bolt spread too much because their spread is a matter of random events, really. Think about it - lightning bolts lock onto targets, and on large bosses like the Egg Cannon, Henterprise, etc., they usually look like this, if not even denser.

With that out of the way, let’s make changes step by step. Since I always have ideas and I can’t pick only one, I’d rather let you guys decide - I came up with a few methods to improve its appearance.

First, allow me to reveal each egg on the image: 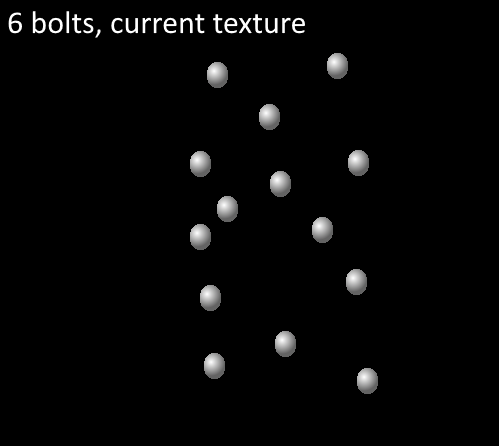 I’m more than convinced some of these eggs were completely hidden by the bolts. That’s the problem I was talking about, and we need to resolve it. The first way to do it could be like this: 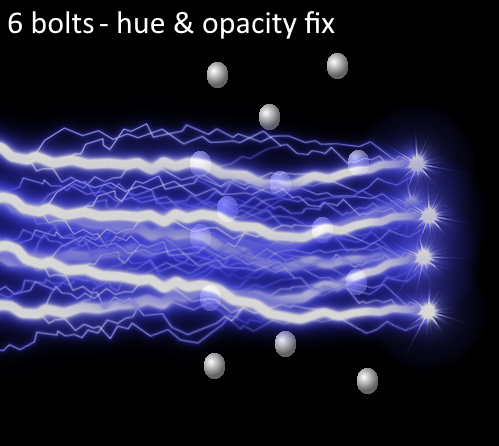 This change isn’t one of my personal favorites, but now we can almost clearly see every egg on the canvas. Still an improvement, but we can think of a better solution. A “better solution” implies more changes, probably gameplay-wise as well. I am nowhere near as competent as Galbatorix at proposing such changes even though I should be because I myself am a game developer, but I’d still like to make an attempt.

Since enemies are already divided into groups like breeds, whether they’re a boss chick or a normal chick, I think it wouldn’t be hard to achieve this. That way other bolts would lock onto different enemies, which would increase LF’s spread (theoretically), while also making the chaining mechanic more effective.

That way bolts wouldn’t be too dense. 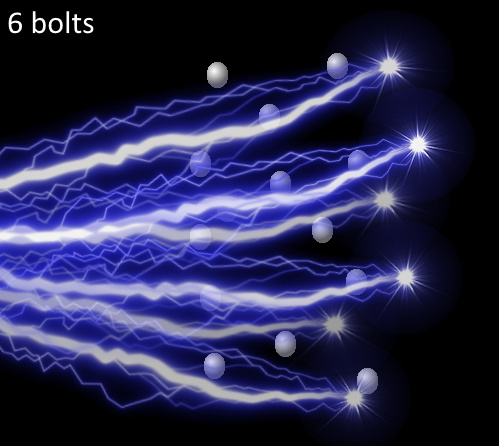 This is a really rough representation of what I’m trying to say. And honestly I don’t expect many people to like these ideas, but then there’s me putting effort into such things to see if there’s a chance I’m wrong about that.
I’m looking forward to hearing other ideas, though, especially if they’re better!

Oh boy, this is getting more and more similar to Palpatine’s Force Lightning. I hope those lightning bolts don’t get reflected way too much to the point where damage is not dealt.

Hm. So WBP is getting finished in one update. I wonder what’s coming?

This is probably gonna be one of the best updates ever, after v40

This is SPARTA amazing!! I can say that V48 will be one hen of an update now that 8 weapons are being rebalanced at once.

i can say v48 will be the massive update for the 8 weapon reworks.

And might be heavier since there are 8 reworked weapons