I have an idea to connect wave music with boss music, something like on a video below. Transition could be with every music, not only CIU ambient and intense theme.

But about in-game music I don’t like 1 thing. If you set certain music in mission configuration, it will always be that one. IA can add more music slots (maybe purchased in store) and music will be randomly picked from one set songs. 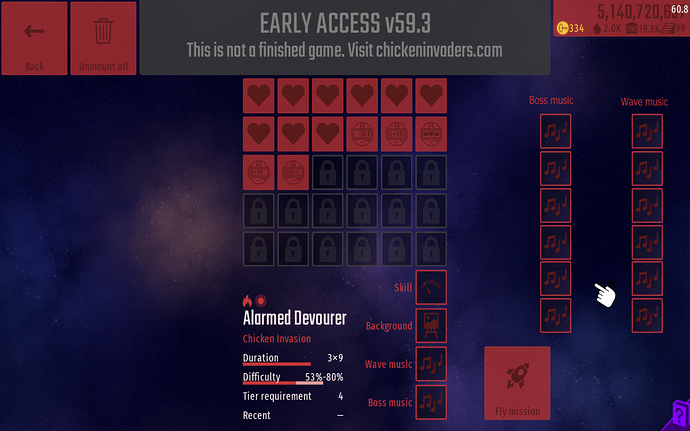 If you meant something like playlists then that is already suggested.

Okay, so I think no one have write this idea, how about add a music playlist on a mission. So basically when you about to start a mission you could choose multiple song in one mission. Example: A mission with 4 stage Music: 1. CI 3 soundtrack one, 2. CI 4 victory, 3. Boss CI 5, 4. CI 3 soundtrack one. (They could be played randomly on option, and can be played more than one). If the mission is boss rush then the music will be played based on the number of the boss on a mission. And (ma…

Before this, I was suggested this idea but I want suggest again. You can select more music by buying extra music slot (Max is 3 or 4) You can choose play by order or play randomly [3%20music] Sorry for the mouse and don’t have random button

I meant it but as an addition to main idea which is music switching. Except fading out wave music and then fading in in boss music, it could be smooth. And if you have equipped CIU ambient theme as a wave music and CIU intense theme as boss music, it won’t start from beginning but in moment, where wave music was. If someone didn’t understand because of my bad english, just check the link.

I hope it adds to play!