We’ve gathered here today to hear about proposal of open-sourcing CI1. There are many open-source games (not as many as the closed ones, but still there are many) nowadays. Not every one of them releases as that since the beginning - some of them just get open-sourced after few years when the sales are no longer too much profitable or for anniversaries or just because.

The latest big example of a game that got open-sourced after the release is old indie hit VVVVVV. It got open-source for 10th anniversary. It got some publicity and after something like ~1.5 year it got first update since 7 years which was created with help of community. Despite the bugfixes it got such things as: unlocked framerate, in-game timer and features for level creators. You can read more here: VVVVVV gets its first update in seven years, and it's a big one | PC Gamer

Have you heard of DOOM, Quake and Amnesia? They are open-source and DOOM especially is loved by people that port it to run it on every piece of tech in the existence.

If you’re worried that your game might end up getting cloned and stolen to make ton of cheap copies without contributing back then just choose some good copyleft license that prohibits that behavior. You don’t even have to open-source the graphics, but it would be nice and would make it easier for people wanting to tinker with it.

So I’m here to suggest open-sourcing the CI1.

Should CI1 source code be released?

Not only this but also the original version of CI2, because I’m pretty sure that isn’t really supported to begin with, oh yeah including the Christmas version.

Christmas edition is literally the same game but reskinned.
As of open sourcing original CI2, I’d rather make it that you need to have a copy of the game in order to access it/build it. Well, to CI1 too, though in that case it’s free anyway.

Of course you should need a copy of the game before accessing it, I mean I’m pretty sure that’s how open source content works anyway, at least with what I’m familiar with.

Yeah I know the Christmas edition is just the same game but reskinned but I only suggested that because of the exclusive assets it possesses, pretty sure only iA has them anyway.

Not only this but also the original version of CI2

While I would love this, CI2 is still being updated and most importantly it is paid, unlike CI1. So it’s harder to convince.

It isn’t supported but it was continued by the remastered version. And it is still available to buy on IA Studios site.

As of open sourcing original CI2, I’d rather make it that you need to have a copy of the game in order to access it/build it.

Yeah, that would work. There are some projects that let you use them if you provide your own copy of game files - heroes 3 fan recreation, diablo 1 in browsers

Well, to CI1 too, though in that case it’s free anyway.

Yeah, CI1 could just go without that obstacle. It’s free anyway so there’s no problem.

It depends. Some work without providing your copy but it’s the case of legality (not exactly piracy mind you, some games are free)

But if CI1’s source code is released, UVEDX should also be released. Otherwise, it wouldn’t make much sense.

It would, actually, if uvedx functions have self-documenting names. This only prevents straight up compiling it.

Releasing a new UVE when.

Providing the source to you in a personal message is NOT the same as “releasing”.

This idea has merit, however anything I’ve made available in the past has been a constant source of further questions, support requests, and a general sink of time and energy on my part. Yes, even after explicitly stating that it’s unsupported.

The fact is that CI1 uses obsolete SDKs and is not directly compilable on any modern platform, and that is going to cause a lot of trouble for me. How many of the people who voted “Yes” in the poll above have the technical knowledge to actually do anything with the code? I could make it more usable before releasing, but that’s going to take even more time and energy on my part, and I currently can’t spare either. 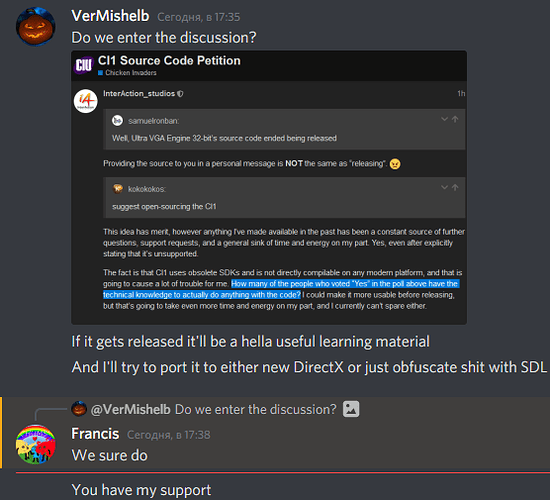 UPD: Also this would help A TON for my idea of making a PSP CI1 port not gonna lie.

How many of the people who voted “Yes” in the poll above have the technical knowledge to actually do anything with the code?

Does it matter? Most of them probably voted yes to have a chance of updated engine with maybe new content added. Also, actual publishing (I suggest github even if you don’t use git, but whatever goes) and the news about it may attract people that are experienced enough to dive into it.

I could make it more usable before releasing, but that’s going to take even more time and energy on my part, and I currently can’t spare either.

I’d prefer you do not change anything there (including comments which probably are the most valuable stuff there for historical and development purpose. Some readme.md document with tips would be nice, but it’s up to you.

Basically people want InterAction studios to release the source code of the original Chicken Invaders game as it’s not supported and is an interesting material. My personal interest is how the project is organised because I have huge issues with this.

I have been debating this back and forth in my mind for several months. I have finally reached a decision. I will not be releasing the source code for Chicken Invaders 1, or any of my games, ever.

Any source code I release would eventually be used to unlawfully create yet another unauthorized game, and I will be powerless to do anything about it.

I know some people would make good use of this source code, but the rest of humanity regrettably sucks. So, no.