Bring Back Certain Waves from CI5

So in CI5, there’d be waves like “Turn Up The Heat”, I think that was the name of the wave, where you’d get corn and hit them into the sun to make it popcorn, and then the underwater planet. What if that wave and then underwater planets as a new planet type were added to CIU?

I think it was said planets are too complex for CIU; also corn is staying CI5 exclusive iirc

I think it was said planets are too complex for CIU

They are not an easy task, but it’s nothing impossible:
Planetary missions generator

We just need more waves that use the corn because IA said that it’s not worth it to bring enemies that are barely used (said this while referring to CI2 enemies, but corn could also match that and we need it for a CI5 DLC in CIU)

True, that could work as well. And exactly! They first said there wouldn’t be multiplayer as soon as the game came out, but they said it was still possible, and look! We have it!

Then why not bring in other obscure enemies? I liked many of CI3’s; eggships, rogue missiles, flat UFOs, and mine-drones are novel.

Then why not bring in other obscure enemies?

Suggest some new waves that could use those enemies.

Existing CI3 waves were fine for their enemies, and they are also compatible with other waves like Under Pressure for missiles or Armored Division for eggships; Energy Fences for mine-drones, flat UFOs could be anywhere Festers are.

i think we need to bring back the underwater wave

CIU and CI5 run on a different framework engine

No they don’t. CIU was literally CI4 and CI5 mashed together. Later moved to DirectX 11, but no major changes. The problem with planetary missions is that in CI5 they were continuous and weren’t split into waves that you can easily randomize however you want. It is possible to do it, but requires work. See my topic above for how it could look. 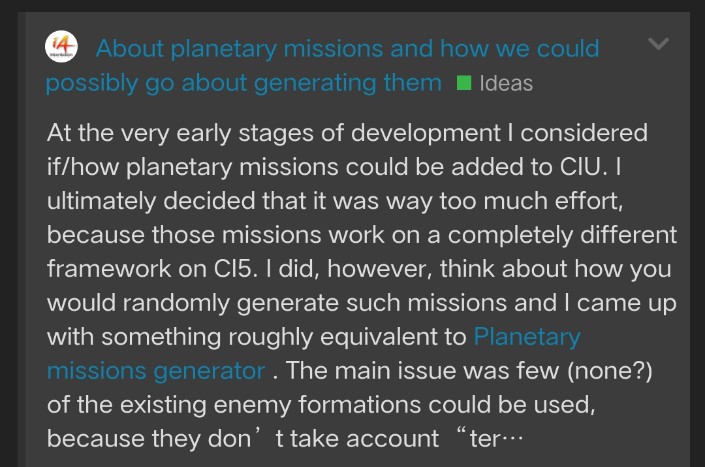 Great, you have found IA’s explanation, but failed to understand it.

CI5 and CIU are not on different framework. Planetary missions are, but they can still get added with rework.