Alright, I’ve been thinking about the two new weapons that have made their debut into Universe. Or at least, one new weapon, and an upgraded version of an established weapon. Either way, it reminded me of the time I thought of a weapon concept myself, and I think I’ve figured out how to make it really work!

So we all know some weapons have their projectiles shoot out at different angles, right? The Ion Blaster is a non-changing sprinkler (one that I think could use a HUGE increase in damage), the Hypergun cycles through changes in its projectile angle with each individual shot, and the Vulcan Chaingun is straight-up random the higher the heat level.

Well, what if we got a weapon that took advantage of this in a way that benefits the player by utilizing a functionality that the Galactic Henpire has been using since the Mother-Hen Ship’s emergency firing mode in The Next Wave?

Homing shots that directly aim at the target’s location!

Introducing the Precision Rifle! Similar to the Neutron Gun and Laser Cannon, these projectiles increase width rather than length the higher the firepower level. And just like the Photon Swarm, the beams change color at Level 20. 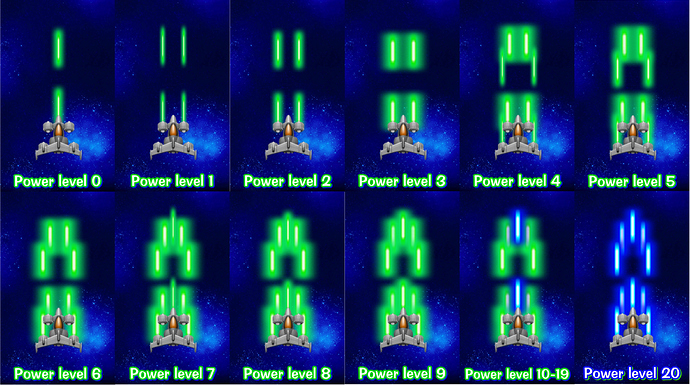 Precision Rifle All Power Levels3750×2096 2.51 MB
Projectile speed is somewhat slower than the Hypergun, and the automatic firing rate is about as fast as the Level 7 Boron Railgun, but the damage at maximum power does the same amount of damage as the Level 20 Laser Cannon.

The way this weapon targets enemies automatically is based on whether the enemies are in the vehicle’s targeting range. 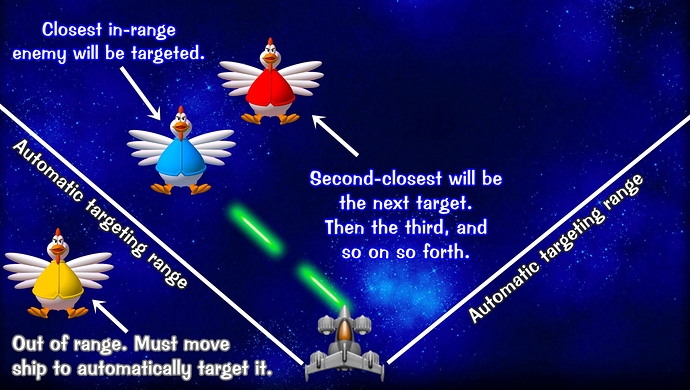 That targeting range WILL narrow down the higher the firepower level. 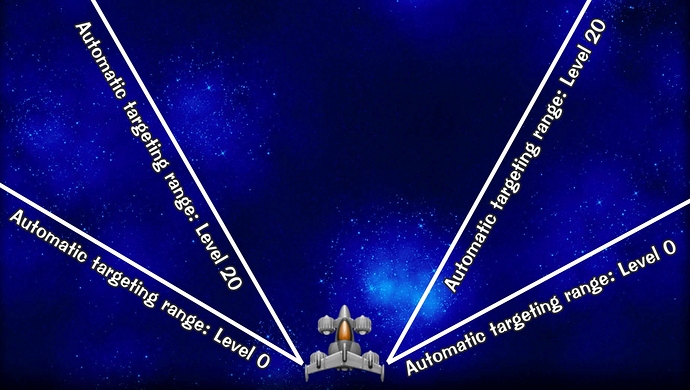 The automatic overheat rate would be around the middle, or depending on your heat sink.

icon would probably be green with a blue ribbon.

And yes, for this much power, it would cost a LOT.

Think this would work?

I’m usually pretty terrible at estimating the balance of something, but I can say that it’s conceptually quite cool.

a fan-requested weapon actually made it into an official game

If you’re talking about the AB it’s not strictly fan-requested. Nobody got an idea medal for it, and iA has mentioned adding a piercing sniper beam weapon for a while now:

@cook1ee: The laser won’t change at this stage – we first want to introduce a new sniper-style instant-hit piercing weapon so we can balance both at the same time. We’ll increase the expander limit to 10 and see (condenser limit will still remain at 5). @EmeraldPlay: The invulnerability was added as a quick hack to stop if from getting destroyed while on the ‘wrong’ side of the screen, but a more elegant solution is needed. Will need to think about this some more…

I guess I misinterpreted it, then.

“Second-closest” will be the next target

What do you mean by this? Will each projectile target a different enemy, cycling through all available targets one by one?

Or will the projectiles always target the closest enemy?

(Also, note that the definition of “closest” is problematic with such a wide targeting angle). Is distance the only criterion? Or is it also how much off-axis a target is?

Closest enemy to your vehicle gets targeted first by every projectile. When he’s gone, then the next closest enemy is targeted.

So yeah, distance is the main criterion.

But each individual beam targeting the closest enemies is also a clever idea.

Maybe both ideas could be experimented with…

If you’re a fan of a certain Nintendo series, you’ll know why I used green and blue for the laser colors.

Calm down. They just asked you a question because they (I’ll never get used to IA not being a team) weren’t sure about how exactly it works.

IA also said that if they heart someone’s post that means it was noted and will be revisited later. I even made a long topic with ideas that they hearted.

Oh. Alright, I wasn’t sure. Sorry 'bout that.

Great idea, I hope that interaction studios will add it to the game

I like the idea. There is the automatic targeting like the lightning fryer and the plasma rift. Then, there is the projectile based weapons like utensil poker and the neutron gun. The way to get this weapon to work is to combine the two weapon mechanic, making a hybrid weapon. This is the easiest way I believe that this weapon can be implemented.