About the current rendition of the bomber firerate fix

After some testing, I’d like to present a post that explains the differences between @1galbatorix1’s proposed firerate fix and the fix introduced in v42.

In case you don’t remember, galbatorix proposed that to fix the firerate on bombers, we simply have to take the average firerate of both pylons.

The system we currently have is a bit different.
I don’t know if these differences are oversights or bugs, but here we go.

Firstly, the system works off of raw firepower, not off of the pylons. This means that bombers get an increase to firerate on levels they shouldn’t. This includes, for example, current Hypergun which has its firerate bumped up to 10.2/s on

40, causing a large damage spike. Needless to say, this is not a good thing.

Secondly, the system doesn’t take the average value. Instead, it takes the value of the lower of the two levels.
So on

3, which consists of a

1 pylon, the system uses the

1 firerate instead of the average.
For example, if we have a weapon with a firerate of 1/s on

2, the weapon fires at 1/s.
Taking the average would mean the weapon would fire at 1.5/s, giving us a smooth progression.

This may seem like it’s of lower concern, but it’s still not ideal. In can increase the amount of cases in which bombers are less powerful than fighters on certain power levels, plus it’d be best to have as smooth a power progression as possible. It can also really screw up weapons that rely mainly or completely on firerate increase (like current Photon Swarm, which with this system gains damage output only on even power levels).

If I were to guess how exactly this system works from a technical standpoint, I’d say it probably takes your firepower, halves it, rounds it down to the nearest interger, and just yoinks the firerate out of that power level. In which case, that’s not cutting it.

Since Photon Swarm is probably the next weapon to be rebalanced, here’s a chart that shows how WBP Photon Swarm would be affected by both versions. 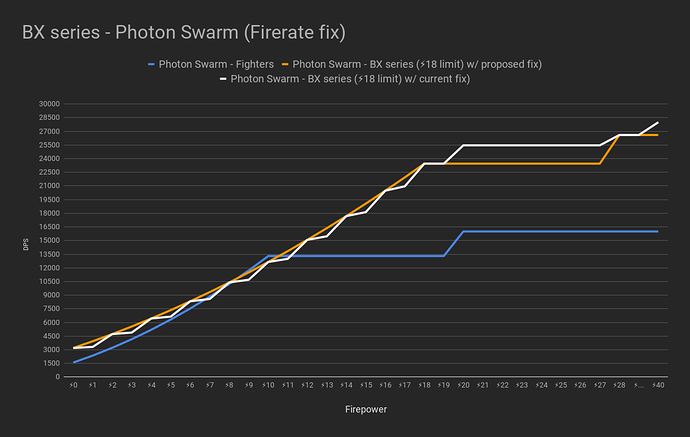 I was reluctant to use fractional power levels (which is effectively what you’re suggesting) just in case to come back to bite me in the future (because fractional levels are theoretical or ‘imaginary’, they are not actually attainable in the game by collecting e.g. power-ups). But let’s hope…