A Temporary Change For The Time Being [remove lengthy waves]

By now, it would be a wonder not to know about the ongoing pandemic that is COVID-19, aka the Corona Virus. It has brought many negative impacts on society, including our internet connections.

Due to the risk of contamination, maintenance and other such work have been halted and as a result there are more network disturbances. Now some of you may have the luxury of a stable internet connection but for others like me whose internet is unreilable, this is proving to be a huge problem, especially when we’re playing CIU.

Certain waves and bosses have a reputation for being too drawn out and lengthy, in that players take a long time to complete such waves and bosses. This used to be a moderate inconvenience before, but now it’s a severe inconvenience which greatly hurts the enjoyment of the game due to the now increased chance of Timed Out and other such things that can force you to replay waves.

The checkpoint system works such that whenever a wave or a boss reaches a certain amount of progress, eg: phase 2 of the Egg Cannon, 50% of Yolk Star, the disappearance of the last chicken from the first "sub-wave’ of chickens in Four lane Merge.

A health nerf on the barriers of Chicken Vending Machine, Do Not Cross, The Weakest Link, Lethal Connections,etc to the point where they’re still considerably tougher than equivalent regular barriers but not taking several tens of seconds to destory, eg: 4 times the toughness of equivalent regular barriers. A Health nerf on the Twice Infinity Boss would be a welcome addition as well.

If you still have problems with my idea, let me know.
May the Forks be with you all!

You mean you often lose your internet connection?

Lets remove the 3 main villians from CI3,4 and 5, sure why not

Neither I do. What does this have to do with a thing that spreads outside?

No offense, but removing waves is already quite a bad idea as it will eliminate the challenge, and therefore the fun part of the entire collection, and speaking of the waves, if you remove the Pulsating Grid, why don’t you suggest Wormhole as well?

Removing the bosses, especially the main villains is the definition of absurdity. If there is a problem with the Internet connection, figure out the problems on your own, as most of these take a maximum of three to five minutes with even severely bad connections. Even less so, actually.

To summarize all of this, the idea of temporarily removing the waves and bosses (especially the main villains) will make the game all too boring and I doubt anyone will accept it. Case closed.

I don’t think a game in Early Access (that isn’t even making money) needs to do temporary reworks to deal with coronavirus.

But yeah. The game is in a feedback stage, and changing things, on purpose, to change them back later would hurt that process. Might be a different story if it was, like, released, but even then I’m slightly dubious.

Quick little rundown about the waves you’re talking about:

Ah, yes at least Rolling Ball O Chick and similar other waves (like flower power maybe?) should have faster pace by immediately spawn the next round of chickens after killing the priors.

Well, it’s a problem with my network administrator, so I can’t do anything to fix my internet because they have stated that they’ll reduce the rate of maintenance works. I can’t force their workers to go out due to Corona Virus and I’m too poor to switch to a better network provider.

Don’t just assume that everyone has the same quality and reliability of internet as you do. My changes will make the game a lot more accessible to people with poor internet connections and thus increase the number of players.

Still, you need to be extremely patient, as patience is what you most likely lack and maybe close a bunch of stuff. I see people with far worse and even far better connections and it worked just fine, I am just an average person. If you find it that severe, just reduce the graphics a bit, or take a break from the game, coming in daily just for the keys.

Try playing the Magic Flute and get 99% progress only to see this: 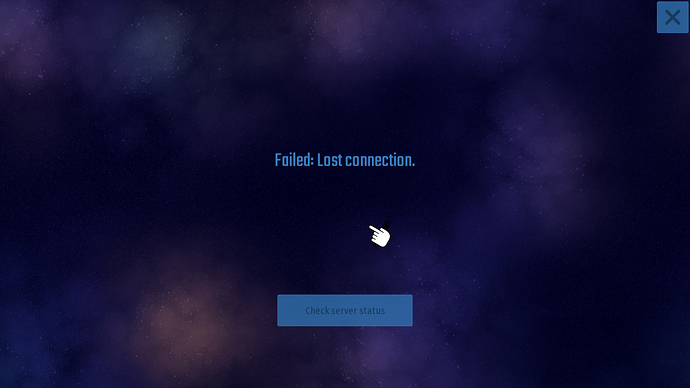 LostConnection1920×1080 535 KB
Now imagine having this problem 5 times over. That’s what I’m going through. It really makes the game a whole lot less enjoyable and makes playing it a chore.

Checkpoints would really help me a lot.

I think most of the waves you mentioned need to be rebalanced, anyways. Waves like visitors from another dimension should let stuff spawn a lot quicker, farming in waves like egg cannon and planetary egg-city fights needs to be fixed somehow so the fights won’t take longer, the yolk star…well, its second phase needs to be changed somehow because it’s just a patience test and stuff like chicken vending machine just need to nerf the barrier health a lot. The 10x health for barriers just make you take forever to destroy them, but you have to if you want to compete(dailies and weeklies). AFAIR these barriers have 10x health because you’re not supposed to destroy them, but most people do it either way. Honestly just nerf the health or make them invincible if we’re really not supposed to destroy them.

You can play for a pacific time like in the noon or you can just wait for a few days and check if it’s working. If you have a second router you can try connect with that router or changing and reboot your router(if you know how to).

Instead of kicking the players out immediately when being disconnected (edit: for unstable connection), I think the game should pause, give a warning about that and let us try to connect again. That should resolve this issue.

I meant the game pause and stop us from playing the game until we connect. And when we connect we can continue from where we left off, not resetting the wave

Yeah, it’s player’s pain when got 95% on Chicken Multiplicity and mom call you to bed

You really don’t understand me or is this just an off-topic post?