This is a pretty short post about ideas that could improve the quality of CIU simply in terms of aesthetics and accessibility.

Pretty self-explanatory. Such a text box could be placed next to the color change preview. 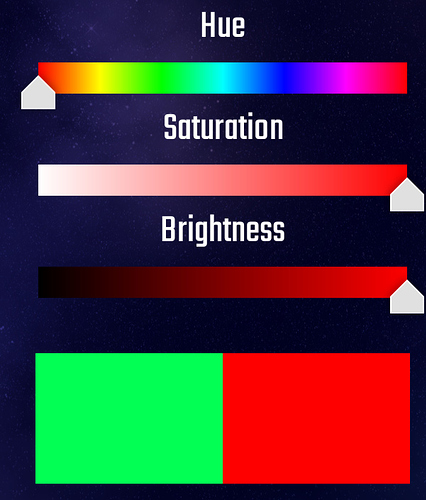 image602×705 102 KB
I’m referring to the two rectangles at the bottom. They could definitely make space for “Hex: #ff00ff” (just an example color) by resizing either their width or height.

Again, self-explanatory. I can’t count how many times I’ve been viciously murdered by pinkish and purple projectiles because they blend with the background (CI3 background the most), especially when there’s a lot going on on-screen.

I highly suggest using distinctive colors, like pure white and pure cyan - more specifically, colors no weapon has in the game. Forks are white/metallic gray, but I think white projectiles wouldn’t be all that problematic since they would be easy to see.

since they would be easy to see.

But what about lightning fryer on 20

To be fair. Lightning Fryer is screaming for a slight redesign because it’s a bit blinding.

Is it possible to have a text box for hex colors in all customization screens?

I’d actually consider that unnecessary clutter - it’s pretty clear what each bar does, even for someone who doesn’t know what HSV is.

Can some enemy bullets be recolored to stand out more?

I often explode without knowing why, so yeah, maybe this would be good.

Why? I wanted to copy exact hex codes and that’s how the idea came to me. It’ll be so much easier than to take peeks at the desired color every 2 seconds and make small adjustments to match it perfectly. Copy & paste - couldn’t be easier.
On top of that, sharing paintjobs would become easier as well if that’s something people do of course.

OH I misunderstood the request, aha

This looks much more complex than what I suggested and most likely a feature only advanced players would use. Simply having a hex code box near the color swatches in the advanced color selection screen would be more intuitive and easy to use.

Yeah, but with the whole paintcode you can easily share your whole spaceship look and not just one color at the time. It would be perfect for squadrons in the galaxy - with one look you can see that they are part of the group.

Honestly yes, that would be pretty awesome.

But there’s a whole second part to this post. Did you read it or were you just quick to send me a link to your idea? If you’re mourning for that idea medal - take it, I don’t suggest ideas for medals anyway, I care more about the experience.

Did you read it

Yes, I read it. I just don’t have strong opinion on that. I, mean… it would be great if all chickens use the same weapons since they are part of one empire or something so they should have the same technology right? But then again we as UHF also have the same technology and you can make a disco out of all the weapons. Eggs are white so this would be the best color and is also really visible on the galaxy background, but there’s also the stuff with utensil poker. I suggested earlier to change it to something more metallic. And nowadays SSH can be a real bullet hell so I feel like now it’s a good time to change it visually. I mean, why the forks are white? You want to tell me that this mighty weapon is literally one-use, picnic, plastic set of cutlery?

The best way of handling the bullets of enemies would be some kind of outline, but it looks worse and we don’t know if engine can even support it.

Returning to paintcode. If we can’t get it in the game then I agree we need something more precise than bars. I am sure that in the game it is actually programmed to use numeric values (because let’s be honest how else can you program it?) so just give us an option to do it ourselves. What, one input box is harder to make than color wheels/bars?

And I’m also sure about it because people used cheat engine to make custom paintjobs long before the advanced color settings screen was a thing. So there’s no harm in adding both ideas.

And there’s also no reason for us to argue over something like this. If you want, we can just both get medals for this (because our ideas are quite different) or not get medals at all.

But is this arguing? I just posted a link to the topic where something similar enough was presented earlier. I do it all the time and not only with my topics.

If you want, we can just both get medals for this

I don’t care about medals now. I already have a whole set of EA medals (before the typo medal gets added) so new ones are just a neat addition, but not necessary. I just want everything to be in order and perfectly clear.