Since my first topic was uninteresting, I decided to suggest the idea of the weapon.

It is - Radon Gun. This weapon melts chicken to the fire.

No, it’s not a ripoff of Neutron Gun, I just wanted to make similar as this weapon. So, no offense, I’m not good at making ideas. I hope this will be accepted or not.

So, there’s a weapon must look like (in Max Power Only): 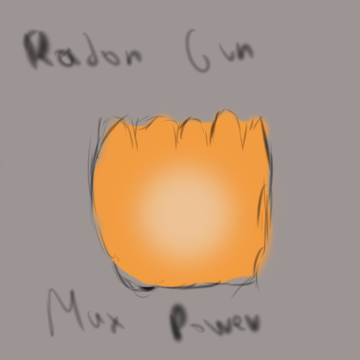 I hope this will be accepted or not.

This hope will moﬅ certainly come true, much like the hope that when you arrive to a ſhop it’ll be either open or cloſed.

The idea in queﬅion ſounds a lot like a croſs between the variöus prepoſed flamethrowers and the neutron gun, ſo I’m not ſure it’s neceſſary, but it would help to balance out the large number of boron railgun- type weapons.

It would be good if you explain what that weapon is supposed to be in more detail, for example if you were to draw how the weapon would look like. Also, saying average/good power instead of some concrete damage values doesn’t really help.

I’m not sure it’s necessary, but it would help to balance out the large number of boron railgun- type weapons.

What, you mean you don’t want Vulcan Chaingun MK IV? But that would be obviously great! /s

UPDATE: replaced the average/good saying to the damage accompaints.

I think it needs to be buffed. 2 damage for 0 firepower? This thing would take 50 shots to kill a regular chicken.(and that’s just in rookie)