Engineered by the best scientists at the UHF laboratories, pilots can now punch the Henpire Chickens without the risks of being close up, through implementation of large rocket fists tinkered to work with specialized rocket launchers. Designed to be compatible with your inner rage, rapid usage can lead to your rockets igniting with burning anger, giving the chickens a scorching taste of your frustration.

The Rocket Boxer will appear in dark-green w/ brown ribbon gifts, with projectiles resembling dark green boxing gloves. Its Weapon Group would either be Organic (you’re using fists, even if they’re modified dumb rockets) or Special.

Firing will result in a fist rocket being shot out from your left, and firing again will deploy one on your right. Basically, firing repeatedly consists of shooting rockets alternating from your left and right, to simulate actually punching someone with your fists. Its overheat time would be one of the longer times relative to the other weapons, making Overdrive more appealing.

The automatic firing rate is decent, but nothing notable on its own, and the rockets have high damage, but take half a second to fly at your enemy after being deployed, and even then they’re only barely faster than Ion Blaster projectiles.

In order to make full use of the weapon, you’ll have to rely on using it on Overdrive, which causes your rocket fists to look like they’re on fire. Rockets fired in Overdrive fly much faster and have minor AoE on impact, with splash range being that of Plasma Rifle’s AoE after 1 second, at maximum power. Plasma Rifle would be still overall better with its AoE, but Rocket Boxer’s AoE will let it deal with groups satisfactorily on Overdrive, and for longer.

Higher weapon levels will primarily affect the projectile’s damage, and also slightly increase the size. At maximum level, the projectiles will change to resemble brown stone fists for rockets, and their Overdrive AoE will be at their maximum size. 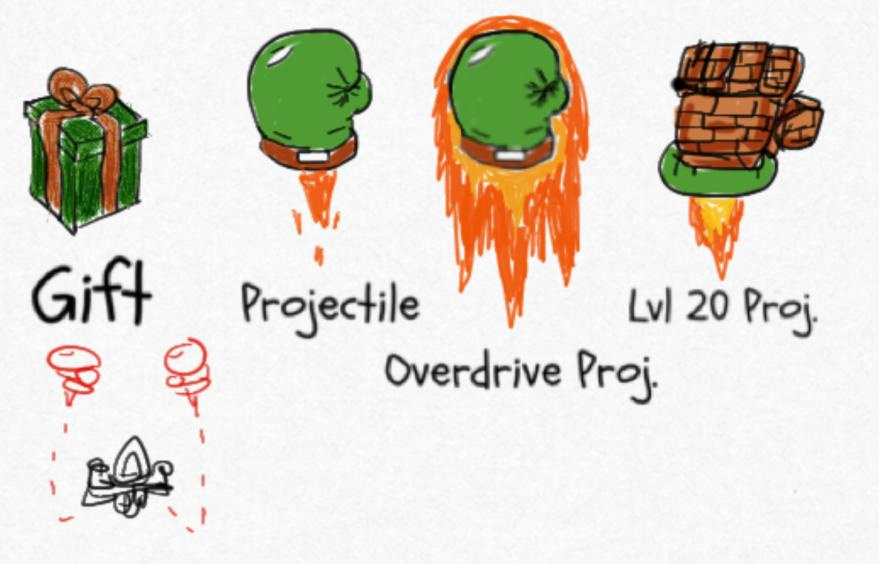 Inspired by the lack of rocket weapons that weren’t missiles that wiped the whole screen.

Its visual design is kinda off (you know, unrelated to “modern” tech sci-fi nor to chickens), but the concept is nice.

Melee weapons? SHUT UP AND TAKE MY KEYS!!!