Ah yes, yet another weapon post. Hopefully this turns out fine, a lot of time was spent in frustration of not being able to get a spaceship in paint.net (details of which i wont explain) after which I just used the CI wiki. Without further ado, let’s start. I’ve asked fellow UHF pilot Jessie to show us the kinks of this weapon. 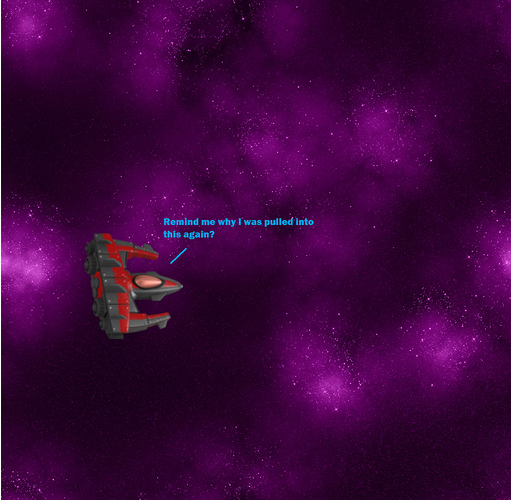 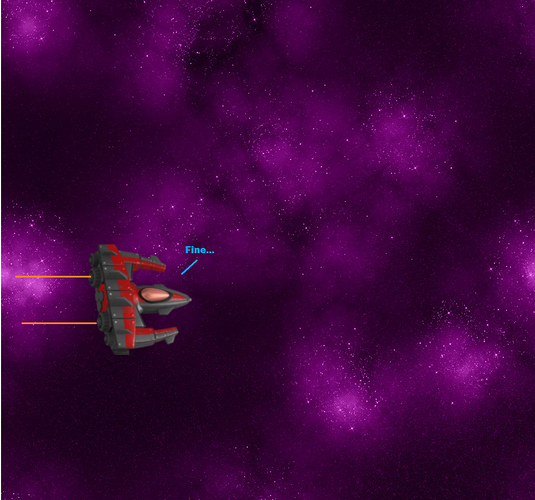 Untitled11516×1416 753 KB
Anyways, let me explain. The way this works is that it drains ‘energy’ from slain enemies. How that works, I don’t know. It fires tiny syringes that fire kinda like the Boron and Moron railgun do. At FP0, it fires a burst of a syringe each from two weapon pods at roughly 2 per second. Note that the syringes are fired from two ‘streams’ only on Fighters/Scouts. As the syringes hit, you get the ‘energy’ from the chickens that are killed. The faster you kill, the more it drains. Now you may ask, “Say, what does the drain do?” Simple! It makes the weapon fire faster for example, a full bar which requires you to kill about 10 chickens within 10-12 seconds with the weapon increases the SPS from 2/s to a whopping 5/s per stream! However, you’ll have to kill chickens fast, since it deteriorates if you don’t kill, kind of like Move or Die’s health system. Although in this case, this can be called as Fire or Die. (Jessie stop laughing goddammit…) As for the FP scaling, here’s how it works.

At base, you deal 40 damage per syringe. from FP 1-4, this increases by 10 damage per syringe and per level. At FP 5, the ‘energy’ bar’s deterioration time is quartered. The same cycle repeats meaning at FP 10, the time is halved and each syringe deals 120. This may seem to be very low damage so to remedy that, you could increase the syringes fired by 1 per stream every two FP levels and also tweak the energy bar. Let’s see it in action: 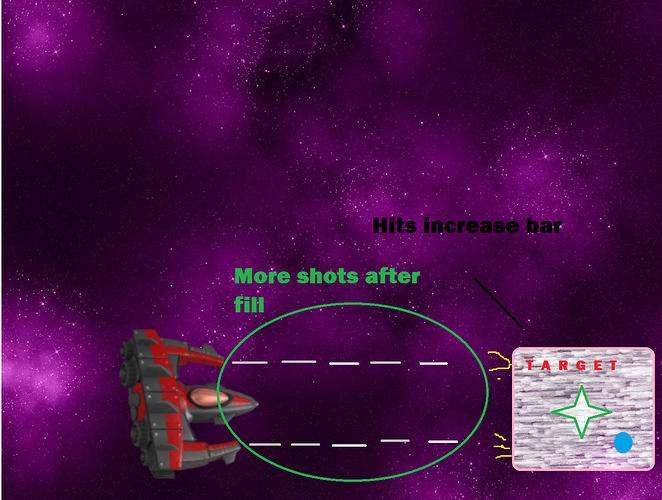 Anyways, I’d like to hear your thoughts on this so this weapon can be tweaked to be made better and balanced. Thanks for your time and your ability to see cringy Paint stuff, I’ll see you later!

Can you make this idea a little more cool :
the syringes after sucking energy from enemy fall down,
if the player catches one of them, then the weapon’s firing rate increases.

I wonder how you shoot something and if it hits then you suddenly get some kind of “boost”. It makes more sense if it’s a kind of sucking machine that drains power from the enemies.

Btw, it’s a nice potential mechanic for the game.

if the player catches one of them, then the weapon’s firing rate increases.

It could work, but the main problem would be bombers. A solution to this could be an AoE effect for collecting the syringes that stays around the ship kinda like the Magnet mount.

I wonder how you shoot something and if it hits then you suddenly get some kind of “boost”. It makes more sense if it’s a kind of sucking machine that drains power from the enemies.

There’s a giant tesla coil within the ship that sucks in the energy once the enemy is killed, but hey, in the end we’re trying to make logic out of a game where chickens fly in space and there’s an invisible floor in space.

not crash on our spaceship