Bullet Rain: First, Easier variant of the wave. Has no Zoom. Starts appearing at 40% difficulty. 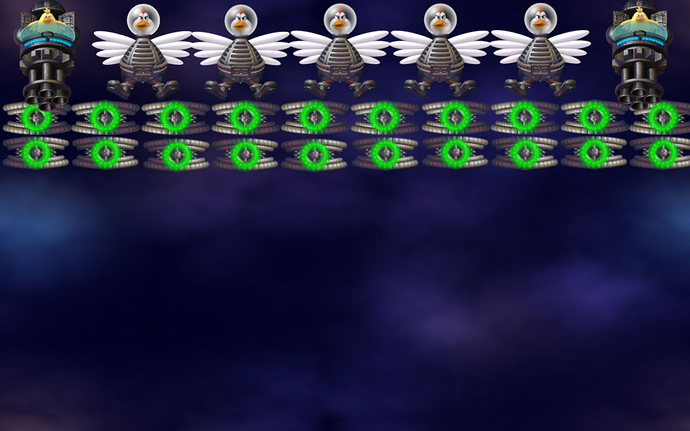 Bullet Rain1280×800 226 KB
Barriers are present to keep you from destroying the enemies too quickly.

Bullet Hell: Second, Harder variant of the wave. Has a 200% Zoom so you can actually dodge the bullets. Only shows up at 90% Difficulty or above. (Rough design. The positioning of the enemies is just roughly placed, so they’re smaller than they look. Try to make it as shown as close as possible) 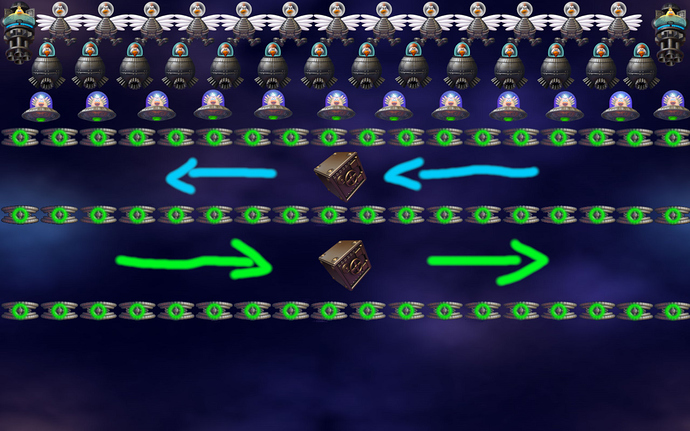 Bullet Hell 1.21280×800 303 KB
Barriers are also there to prevent you from killing the enemies too quickly. Two Alien Containers are included to at least give you 4-6 satellites to hopefully help you survive a little easier. The arrows are which direction the containers will move. They will reappear from the other side of the screen after they go off screen. They will also disappear if you somehow manage to clear the wave before breaking them open.

This wave is meant to be genuinely hard, but not unfairly hard like “Epic Waves”.
Protip: Just make sure you start firing immediately instead of stand there and gawk.

The enemy types that spawn in those waves are fixed. They will always spawn the same way, the same types, the same amounts. Just like shown.

Finally, some hard and fair waves

Why the second variant isn’t named “Bullet Storm” to match the “rain” theme?

Well, iA might run into unnecessary copyright issues with the word “Bullet Storm” because there’s a pretty popular FPS game with the same name.

I know that copyright law can be ridiculous at times, but I think it’s unlikely that this would be an issue, considering how generic an expression this is.
(Also, the game’s title is written as “Bulletstorm”, but I have no idea if that would change anything.)

On the topic of copyright, I wonder how iA flew under Disney’s radar for 10 years. (Hen Solo.)

Parody falls under fair use.

Oh, you would be extremely surprised.

case 1:
Game Ion Maiden - sued by the band iron maiden even though it wasn’t the same name and in fact iron maiden is a name of “tool” used in medieval times. Game later got renamed to Ion Fury

case 2:
Copyrighting “Edge” word - Started with Edge game and they got sued by EDGE games. Unfortunately for the company that sued them EA also had a series with that - Mirror’s Edge and luckily they won so there was no need to rename it.

case 3:
FBE and copyrighting “React” word. Well I think we all know how it ended - with massive internet outrage

case 4:
Bethesda and their copyrighting of Scrolls, Prey, Fallout (all are pretty common words in English language) vs Mojang and some indie studios. Bethesda won.

On the topic, the 2nd variation is dealable enough given that there’s lot of space to move, even with bombers.

I updated the topic with the “Toned Down” bullet hell. Take a look?