Somewhat inspired by Battleship.
Starts appearing at 50% difficulty. This wave can be flipped/mirrored.
Blue Circles are Anomaly Zones.
This wave will only spawn Lasergun chicks.

IMPORTANT: The Laserguns WILL NOT aim at the player. They will always be facing straight down/up, or straight right/left, depending on their position.
(This picture is just an example. The wave will not always be like this.)

Barriers are present to prevent the player from destroying a Lasergun too early. (unless they have Absolver Beam) This is so that the wave will at least get a chance to be at it’s maximum lethality for a bit. 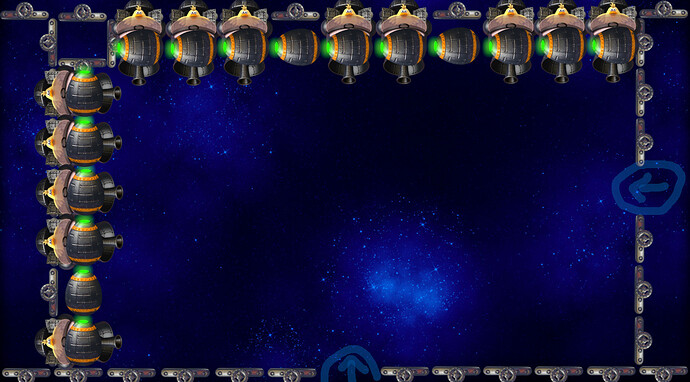 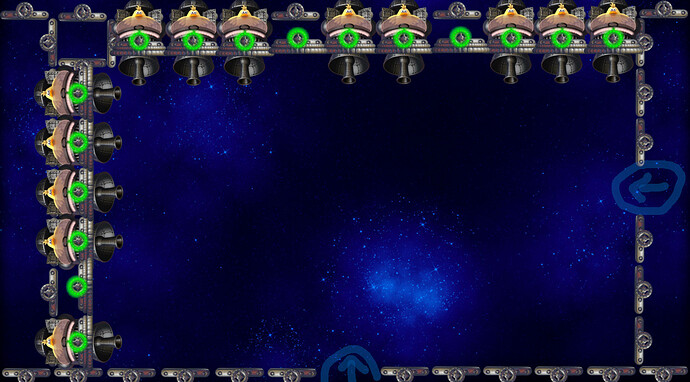 Basically, you want to find a safe spot within the laser grid, and destroy the Laserguns. Use the Lasergun warning lines to know where to stand at!

Difficulty affects the number of vacant Lasergun spots for each axis.

The Laserguns are stationary, but will randomly fill in another vacancy in the axis they’re in to change the safe spot(s) you’ll have to stand in.

Alternative: The Laserguns can also move up and down/left and right, and also randomly fill in an available vacancy on the same axis. They will stop moving when they create their warning lines, but two Laserguns cannot occupy the same spot.

Writer’s Note:
The Lasergun Chicks do not really have much of a chance to shine, so I tried to design a wave that would give them some potential to be dangerous.

And while thinking up of a wave that would best suit laserguns, the battleship target grid came to mind, and this wave design was born.

Imagine IA comes here and everyone is writing this