Yes, this wave is designed to (probably) be hard to get Clean Sweep on, along with have the player constantly flip around to catch chickens before they get away. 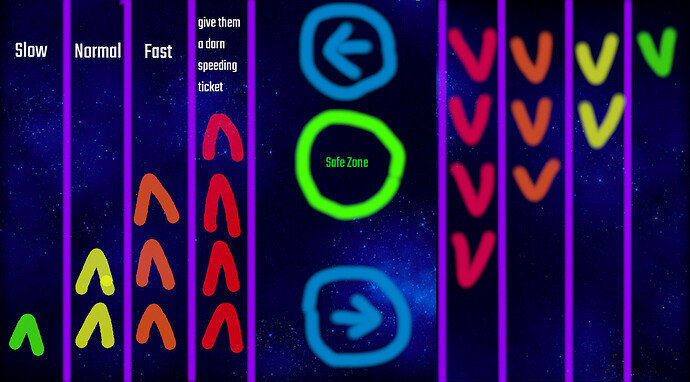 The blue circles are anomaly zones. The colored arrows are just to show the direction the chickens go, and at what speed.

In a way, this wave is High Speed Chase v2, but instead of coming all together on 4 lanes, chickens will randomly appear in random numbers at a random lane at a time, so be ready to change directions to get them before they run off. There will be laser barriers that work like a road.
Sorta like Symphony No. 1 in C major, but wider.

Each lane will spawn up to 10 chickens at most.
Difficulty affects the number of chickens that will spawn on each lane.

The chickens will use the same speed as they did in High Speed Chase. Chicken spawns will work like they did on that wave too.

Alternative:
Instead of random chickens, it spawns a line of chickens in a random lane instead.

I felt that most of the waves are just very easy to get clean sweeps on whenever players used weapons that had autolock, or is just straight up powerful, so I wanted to try designing a wave that actually has the player actually work to get it, no matter what weapon they use.

Admit it. A lot of waves just straight up give you the clean sweep without much effort anyway.

Eh, this is basically double high-speed chase, one of my least favorite waves. Sure it’s less boring with anomaly zones and random chicken appearances instead of a consistent stream but I’m not too big a fan.

Waves like Weaving though traffic offer a better example of a hard to get clean sweep wave. Heck if you really feel like getting Clean sweep should be a challenge then why not fix the existing roster of waves. Raise the curtain can have the formation clear up faster. Asteroids no really can have 4 asteroids max, etc.

But really though clean sweep is not that easy to get. Not for the majority of the playerbase at least.

I still gotta object to the purpose of this wave cause it still looks a bit too much like High-speed chase which will prove frustrating to most.

well, what do you know

In a way, this wave is High Speed Chase v2

it IS supposed to be a harder High Speed Chase

and please, note that there’s a zoom to give you more time to change directions

and on another note

why not fix the existing roster of waves.

while i do not mind difficult waves and whatnot, i feel that just adding to existing waves is just not a good way to solve that.

plus, one hard wave is better than a mix of 50 edited waves

Eh, I can’t really stop this wave from being accepted. So yeah I regret starting this argument up in the first place.

there’s a good chance that iA may take your words into account anyway, so it’s not too big of a loss there

but you gotta admit that constantly facing one side to get a clean sweep is pretty boring, so there’s at least some action going on in this one with constant flips

Admit this: The chance to get Clean Sweep in this wave is unlikely.

yes its a waste but it works

Using missiles disqualifies you from getting clean sweep on that wave (unless this was reverted back).

Getting clean sweep also depends on what type of enemies are on that wave. Like getting ordinary chickens vs getting cowards in omnidirectional onslaught.