Yep, a new boss idea, after so long…

Okay, here’s the way he looks, a bit of a hybrid between the ordinary and the military breed. 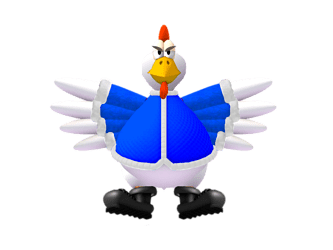 Depending on the difficulty, the ball will explode into 3-9 smaller balls that will create a forcefield.

This is the animation of the shield, with some rotation that I didn’t animate. This will prevent the boss from getting damaged until all of the balls get destroyed.

The ball gets hit by the keeper and bounces across the screen several times. The duration will be the same, so that means that it is dependent on the speed and the amount of times it’ll bounce before disappearing and a new one drops.

Third attack: “We got the dummy!”

The boss will not be stationary like in the examples. It’ll have 150,000HP and by death, the fight continues with four Big Chickens, and nothing after, it has weaknesses similar to that of CI3’s Big Chicken, and that’s all I can think of right now, aside from the quip for his death which is “GOAL!”

If it’s British it starts crying loudly before it dies

Probably. There will be a fictional chicken football team called “Chickens United” (after Manchester United), if there isn’t one already.