Disclaimer: The story below isn’t a idea for the reason of this wave in CIU and is purely a reference to TF2.

“While chickens are still fighting against our species, there have been some chicken groups that are fighting against other chicken groups. But why? Nobody knows! Is it money? Is it just the desire to eliminate someone or something? Recruits ask themselves the question: ‘Why aren’t they shooting at me? They shouldn’t shoot each other!’ At least, if you go directly into their war zone, they may form a temporary truce to make you paint the space red.”

This wave is based around 2fort from Team Fortress 2. It plays and looks simple enough, Chickens in 2 forts trying to kill you. The Player will have to use the anomalies to destroy the forts. The wave appears when the mission has 65%+ difficulty. 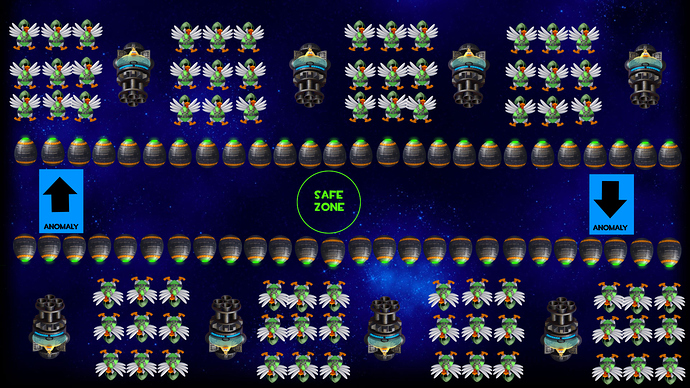 CIU_TF_WAVE1920×1080 945 KB
Notes:
The Gatling Guns will shoot one-by-one.
The smaller chickens’ type will rely on the difficulty, when on 65% it’ll just be pilot chickens or metal-suit chickens. Gradually, Slobs and Cowards will appear.

That’s it for now. Comment if you have any doubts or criticism.

Edited topic to add something I forgot to add.

, but it seems interesing and fun to play

Looks really cool, but oh I would not want to face this wave filled with minibosses.

Yeah, I think I’ll cut the Armored and Chickenauts from the idea.

An interesting idea, but when a chicken will get an egg from another chicken will die immediately? Maybe let a group of chickens fight with Droids or Retro Invaders (it would make sense, because may two species come from another dimension) you can use tactics here: The enemy of my enemy is my friend.

Nah, Chickens won’t die from other Chickens’ eggs. The little story on the start of the thread is purely a reference to TF2 and isn’t a idea for the little canon CIU has.

Mini-bosses won’t be in this wave. The worst you could get are slobs and cowards.

Wow what a nice reference from tf2, I love it!

In that case, when the chickens fight each other and the eggs and bullets do nothing to them, it makes no sense.

As I said, purely a reference to TF2 and isn’t supposed to be actually canon in CIU. If you truly want the reason from the story, the reason they do nothing is cause they formed a temporary truce to destroy the recruit first and then when they do, they continue their fight.
I edited the topic to put a disclaimer.

It is known that Chickens have an alliance with Aliens, but not with other Droids and Retro Invaders, I think they should fight them.

I very much like your idea, but I want to keep the wave chicken-only.

It’s your idea and I will respect it.

I would cut the half side for sure, it’s an overkill