Talk about stuff. Progress, missions, whatever 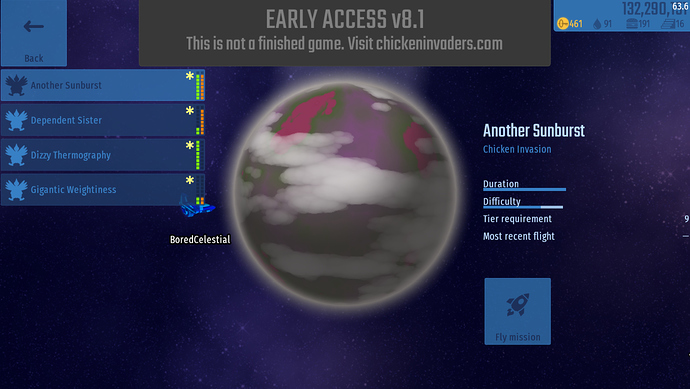 I bet that Dizzy Thermography mission have 0 tier requirements. However i play long easy missions like this after when i played a long hard mission. Someting like relaxing, maybe is boring long easy mission for a lot players but for me is relaxing.

Long and easy is pretty relaxing indeed. I’m still trying to save up for Superstar Hero though. 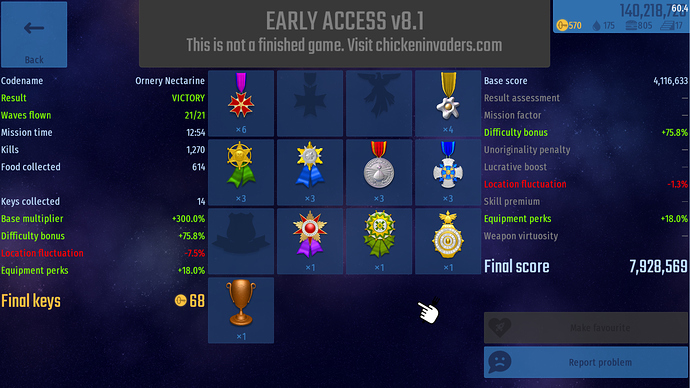 I don’t use extra lives though.

Well i play early access for fun. I dont play seriosly for progress or something. I even didnt explore all planets in the star system when i travell. I dont care so much about where i will go, but here is a advice for you: If your fuel is important for you, dont go into the voids to travell around a wormhole. Probably the waves will be locked and even you can enter into the whole. Better to spoil that instead some player to be tempted to go to a wormhole.

I’ve never encountered a wormhole though.

I’ve seen one, they are pretty useless at this state.

I kind of like the wormhole but every one has their own opinion.I was able to discover 7 and was able to visit 3.

So I attempted today’s daily challenge… 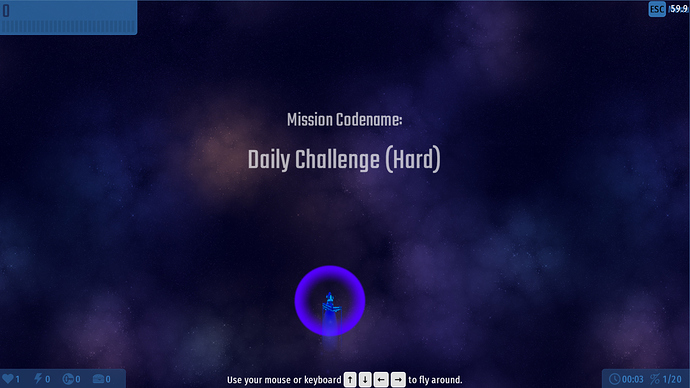 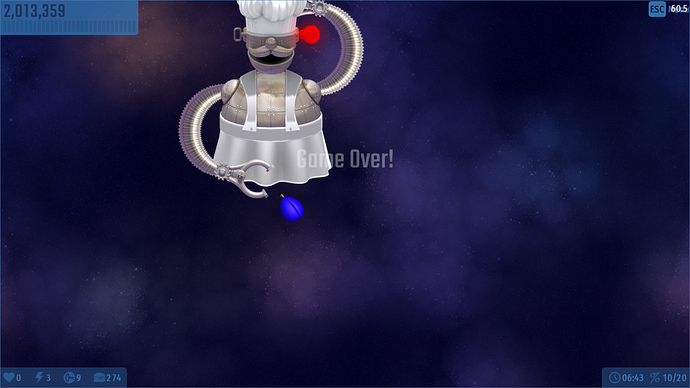 And died to the hands of Mr Grabby hands. Go me. (I didn’t even shoot him once!) 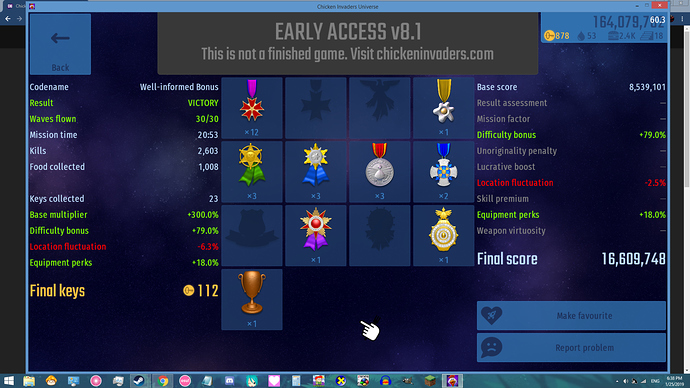 It was a Well-informed Bonus indeed.

Well the daily challenges really makes me rage. The intemidate challenge was harder than the hard challenge. I’v never raged so much at this game. And for sure is from the spaming Chickenauts, Egg ship chickens and ect. However i lost it yesterday intemidate challenge at the egg cannon, i was so pissed that made game over. As a conclusion i will add that High speed chase is the most stupid, annoying level that you can put on daily challenge. Yeah is a challenge but i hate this level, if i play on some planet mission and its hard i just take a break and wait the level to ends. I just have no words to describe how much I hate that level.

Well, I recently got “Superstar Hero”, so I went to get some items as well. Extra lives, Invincibility, Increased collision damage, and explosion on death. I only take one per level though. As a precaution. 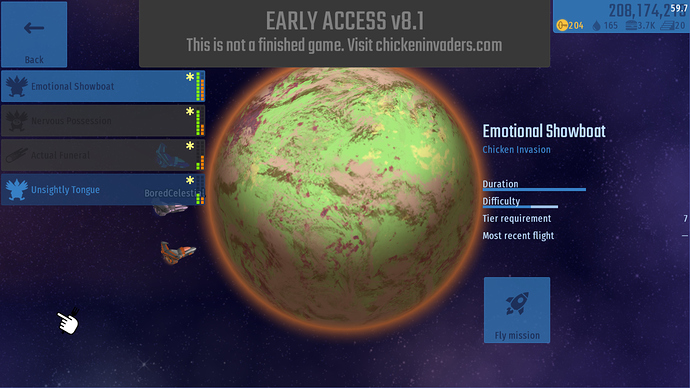 Woah, this lasts 40 waves.
I got 3 game overs on the first wave already.
Okay, this mission is a huge patience test.

I hate high speed chase wave, even when it’s easy, it’s borring and sometimes I just watch it go and don’t kill anything.

I literally just stand in a spot, and fire the Utensil poker at a speed where it won’t even gain heat. Usually that’s all it takes. Except for that one chicken that escapes.

I’m gonna try to beat this mission. Will say how it goes.

Wave 1/40. Nasty Surprise. Try to not have more than 5 UFOs on screen at once. I recommend that you do this slowly.

Wave 4. Swimming in Space. If you have less than 3 power, this may be hard. With 6 or above, this will not be too difficult. You probably still can’t kill ALL the chickens though.

Wave 5. Do not cross. Kill off whatever’s on the same side as you. Do not bother with the Egg Barrier.

Wave 7. Soft in the Middle. I recommend that you use a Damage Amplifier to speed this up immensely. If you have at less than 5 power, It’s better for you to restart the mission. The amount of Spacesuit Chickens and Egg Barriers would say so otherwise.

Wave 8. Gyroscope Malfunction. Do not go to the corner of the screen to shoot a chicken, you’ll risk having a chicken run into you. Wait for the angle to change before firing.

Wave 9. Spiral of Doom. Stay on the left, and try to kill as many chickens as possible. Make sure you can at least clear a path so that you can get out of the spiral when the wave is nearing it’s end.

Wave 10. Chicken Multiplicity. Do what you would with Superchicken. After that, stick to one Infinity at a time. Finish off whatever comes out of that infinity, and then deal with the other. Use a Damage Amplifier if you need to. Don’t try to attack when they’re on the bottom of the screen though. Warning: Do not rush this.

Wave 11. The Weakest Link. It should be obvious enough.

Wave 12. Three-Stroke Engine. Get rid of the middle group first. That should give you some ease to move about when you need to. There’s one Spacesuit Chicken per Group. Destroy the Egg Barriers if you want.

Wave 13. Bundle ol Chicks. There are no Chicks in this wave at all.

Wave 14. Sweeping Swoop. Stay on the safe spot, move when the chickens are no longer on the left, and try to kill as many as possible. Repeat.

Wave 15. Raise the Curtain. Just kill if you want, otherwise, just don’t get in the way of the chickens. Eggships on the 2nd part. Spacesuits on the 3rd. At least kill off a group on one side.

Wave 16. Heavy Metal. Not very hard. Just make sure your firepower is above 10 to speed this up.

Wave 17. Chicken Vending Machine. Do not rush this. Deal with only one column at a time. Destroy the egg barriers if you want to make the wave slightly more bearable, except the wave will last a lot longer.

Wave 18. Chink in the armor. Rather easy wave. Do not panic though.

Wave 19. Look in all Directions. Do the same thing as you would with Gyroscope Malfunction. Do not stay in the corners. Deal with the UFOs fast.

Wave 20. Giant Robotic Space Crab 2.0. Get to the bottom right/left corner IMMEDIATELY. When he’s done throwing 3 waves of mini-stars at you, repeat the process. Try to make him fire to the other side, and slowly work towards the opposite direction.

Stage 3. I hope you have max power.

Wave 21. Barriers to Success. Only a single Spacesuit, with a lot of egg barriers. Try to destroy as many egg barriers as possible, so that you can have some breathing space.

Wave 22. From Cover to Cover. Destroy egg barriers if you want to make this easier. You can stay in the middle, but the egg projectiles are aimed right at you, so move if you need to.

Wave 23. Black Hole Skipping. Do not stay too close to a black hole.

Wave 24. Rectangular Layouts. A lot of barriers. Deal with the left/rightmost ones first, then work your way to the middle, which has UFOs.

Wave 25. First Impressions. Deal with the UFOs and Eggships fast. Stay at the bottom. On the 4th part of the wave, Work from left/right to the other side.

Wave 26. Three by Three. If you want to, use your damage amplifier. Or else, just kill as many as you can, as the chickens will escape. There are UFOs and Spacesuits though, so be careful.

Wave 27. Wormhole. Probably the most dangerous wave. Destroy one side as fast as possible to give yourself space to move and dodge. There are 8 eggships, 4 of each are opposite each other. Amplify your damage if you have to.

Wave 28. Chicken Aerial Show. Killing is not necessary, but you can do so for extra points. Or if it makes you feel more comfortable.

Wave 29. Chicken Rings. Rings of UFOs, Spacesuits, and with bubbles too! And with chickens that drop egg mines to make matters worse. Do not amplify, as the bubbles will render it useless. Deal with the bottom ring as best as you can. Once the bottom row of UFOs are gone, the wave will become much easier. Just be prepared for some bullet hell.

Wave 30. The Iron Chef. Misdirect his attacks, and start firing when he moves. If a Neutron Gun weapon box drops, get it. You’ll want to kill this guy quick. Just don’t get slapped by his grabby hands.

Wave 31. Extreme Square Dancing. Eggships, UFOs, and eggshells. Eggships may come out of eggshells, so make sure that you get away from them. If the amount of stuff on screen is starting to confuse you, stop firing for a moment so you can orientate yourself.

Wave 32. Eggshell Fields. You don’t have to do anything if you don’t want to. However, there are no eggships in the eggshells, so don’t worry. There are still UFOs however.

Wave 33. Bend it like Beckhen. Destroy the Soccer balls if you want to reduce the risk of running into one. The 4th part will have UFOs, however. You don’t have to kill any chickens if you don’t want to.

Wave 34. Do the Backstroke. You don’t have to kill anything either, but there will be Eggships and Spacesuits. Destroying them would be recommended.

Wave 35. Electrifying Descent. Just clear a path on one side. There are spacesuits in this wave.

Wave 36. Chicken Fractals. The egg projectiles drop rather fast. Other than that, it’s a pretty easy wave.

Wave 37. Chicken Quadrants. Starts out simple. But there will be a ridiculous number of UFOs. Deal with them in rows and not groups, so that you do not let more of them spawn as soon as they’re destroyed.

Wave 38. Spin Class. UFOs, Military chickens, and spacesuits blocked by egg barriers. The Military chickens drop double eggs that move fast, UFOs that fire 2 bullets in 2 diagonal directions below them, and Spacesuits that fire 3 random bullets. Deal with the Militaries and the UFOs quick.

Wave 40. Brothers Reunited. Get rid of the Party Chicken first. The Veteran Chicken won’t be much of a problem. 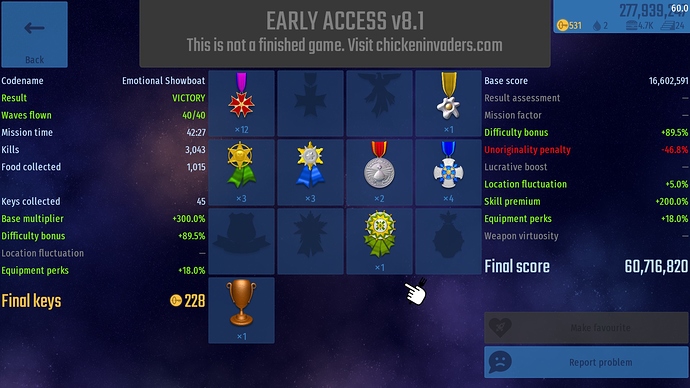 It’s not hard, it’s borring, a bunch of chicken crossing the screen, I just relax and watch them pass by…

Well you will get better over time. I died 1 or 2 max times if i play seriously but if i am distracted i can lost even the challenge. The most annoying thing is when i almost survive some level i take a shitty weapon like the photon swarm(not on purpose). 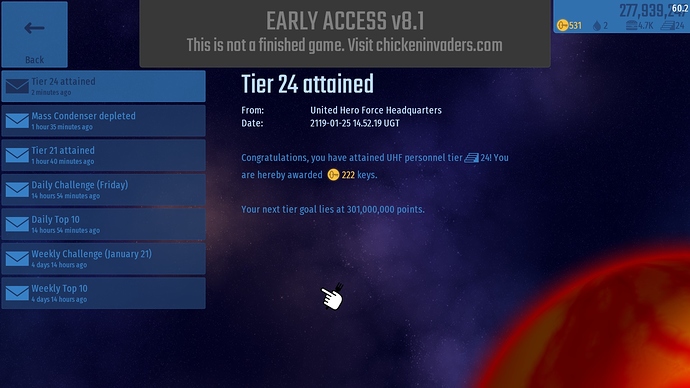 @Nikito Are you proud of me?

You told to talk about whatever so I just want to show that I finally crafted foiled badge from CI5 on Steam. After ~4 years: