My idea for this screen is to show more information to the player about the squad he is in, this information would be shown as seen in the image and would contain the following:

1.Total score: Shows the total score that the squadron has tended since its origin. Also this option could be replaced by ´´Week score´´ where the score obtained throughout the week would be shown and it resets every time a new week is started.

2. Day score: Shows the total score that the squad obtained in a whole day, it could also be called ´´Today’s score´´.

3. Day position: It shows the position obtained by a squadron during a day, by position it is understood if I am in first place, second, etc. It could also be called ´´Position of the day´´.

4. Mission played in the day: It shows the number of missions played by all the players that make up a squad in a day.

The other options that are currently in the game (until version 47 where this post was created) which are ´´Last activity´´ and ´´Assignments completed´´ would be of a smaller size as shown in the image. 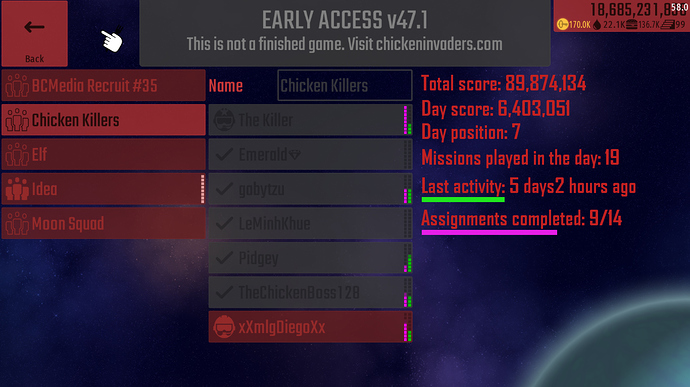 As its name indicates these options would be seen from when the game was paused, the options it would have would be:

1. Mission information: This option shows the name of the mission, the type of mission it is, its duration and the difficulty it has.

2. Mission waves: This option shows the waves that a mission has, these at the beginning (that is, the first time you play a mission) they will all appear as ´´ ??? ´´, since you must pass an entire mission to know them. If a wave has, for example, 40 waves with the mouse wheel, you can scroll down the list to see them all.

4. Mission complete %: Here is the progress that is made in a mission according to the waves you have passed, 100% obviously is obtained when finishing all waves of a mission.

5. Medals: The medals you have collected during the mission are shown (clearly without reaching the final screen of each mission), this option is located in the section below. (This option may be a bit unnecessary, but I still decide to show it in case it has any future) 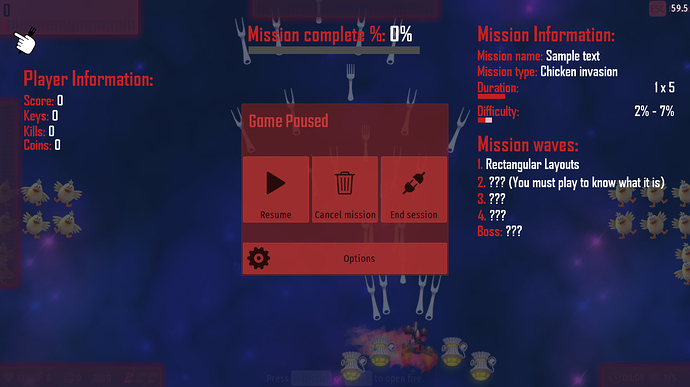 To add this to CIU I had 2 options in mind:

1. Configuration in the graphics menu: Within the advanced options you would have a section called ´´Pause Screen´´ where you could only activate this option with everything shown or configure it to suit the player, deciding which sections to show.

2. As a mountable object: Its name would be ´´HUD Pause´´ and it would be equated like the other ´´HUDs´´.

Mostly redundant. I’d like to keep the pause screen clean.

Mostly redundant. I’d like to keep the pause screen clean.

Maybe you could add an option that shows this.

Adding checkboxes willy-nilly is a mark of bad game design.

We’ll be etching those words on his grave at this point.

I think it would be enough to add a name and a mission progress bar to the pause screen below or above the current window, without all these details, as a function inherited from mission status from CI5.

1. Mission information: This option shows the name of the mission

Already Suggested by me and Doge

One morning i wake up and open CIU, and oh i paused this mission yesterday. Okay it’s fine and all but “What is this mission?” “Is it a normal invasion mission?” “Is it hard or easy?” “It looks like a boss rush!” “Is it Hearty Tribune?” “If it’s Hearty Tribune I’ll try to finish it but if not i just want to start all over or just quit so i can read the notifications.”

The game should show mission information on pause screen when player return after like more than one hour.

Mission information: This option shows the name of the mission, the type of mission it is, its duration and the difficulty it has