Hi! My name is Stardrone and this is the Spacecraft Concepts Program (SCP for people interested into details) and in my opinion Chicken invaders is a series that has one of the best-designed ships I have ever seen in a videogame.
Think about it: if you show someone a screenshot of you using any weapon except utensil and into a “environmental” mission that guy/girl would be really impressed about the design. 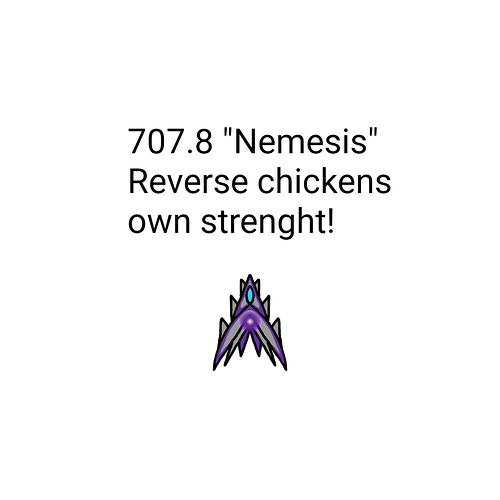 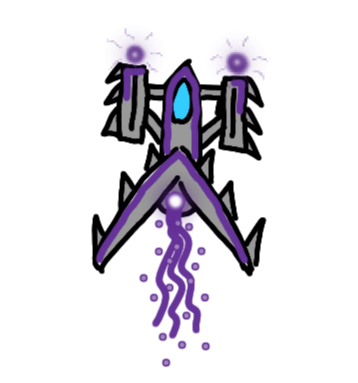 Actually this ship is more similar to the classic design rather than being more different (Opposite of how Hellburner was). By the way both in “beta” and “actual” design you can see the Leeching reactor (purple orb), central for design, tecnical lore and gameplay. The orb will glow lighter the more percentage of chickens in the wave is still alive.

This ship is a good concept in my opinion but I didn’t really find any good calculation on how to balance the damage formula. I will repeat this but I am really sorry, I’m still early on game designing.

Overvew:
Class: Leeching cruiser
Ability: Parasite
“This ship is the incarnation of strenght and driving one gives a unique taste of power. That’s all granted by the unique ship’s Leeching reactor that powers and buffs it by absorbing the neural activity of nearby chickens… basically the more chickens attack you, worse the damage is.”

By the way this isn’t true! But is to explain better how Parasite formula works.
In reality the ship deals damage calculate with this formula (Indicative, the results are totally not balanced at all):
Y=(Z × X):50

A max power Neutron gun has z=500 and 16250 manual dps and 2500 damage per volley.
This will mean that into a wave at 69% the Y will equal to 310 (since 100-69=31)and will deal 10075 manual dps the damage per volley will be 1550. Fewer damage but found that at 0% this thing will be able to deal Y=1000 will have 5000 volley dmg and 32500 dps! Basically a skill-based beast.
My idea behind is that on the early of waves these ship should deal even more damage than an Hellburner during Fiery Rush but on the end should deal nearly less damage than normal.

Ships specs:
Less speed than H&C but more than Hellburner (2.5)
Has 2 firepower condenser incorporated, making easier to deal even more damage to a single enemy. Consider this as buff for Ion,Corn ecc…

(Names are based on parasite names or illnesses caused by them)

LC 610: Acari
Same stats of Flea but the satellite positions are swapped

I premit that this ship may be… A bit controversial on some point. So I expect a lot of discussion about.
Codename: Loki 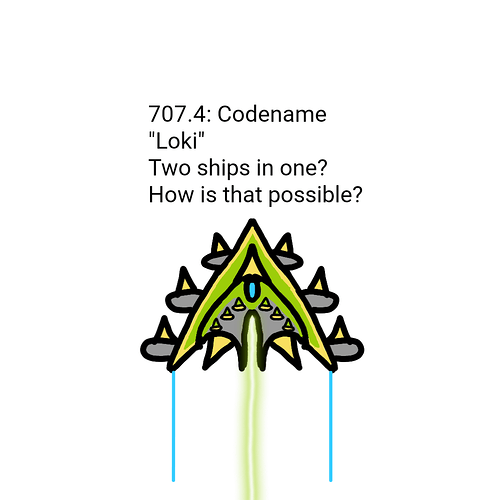 While designing this ship I tought how far this design could go further the “traditional” and how much how to stay further.
I decided to choose the “highly experimental path” give the ship a very “arrow” form.
The choosen colors were put simply for aestetic and not to show the true base paint wich is this:
Image: 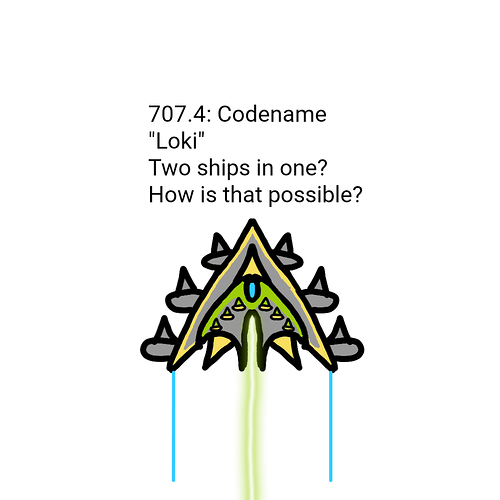 Overvew:
Class: Heavy Carrier
Ability: Heavy and light
“Have you ever wanted to have one more chance to fight those chickens even if an egg made your last spacecraft explode? Yes? Now your dream is real!”

Last stand ability:
You will be able to use ship 2 after ship 1 is destroyed.
By the way that will still count as a life lost and when ship 2 will be destroyed you will lose another life.
But the respawn will be immediate, with immunity if 0.3 seconds (to prevent spawnkill)
Ship 2 isn’t affected by the firepower loss penality after death.
But if ship 2 Is destroyed the penality will double (like you effectively died 2 times) because I tought this was a simple way to balance the ability.

Ships specs:
Speed 1: Same of Bombers
Speed 2: Same of Nemesis’s
VZ 803 Is the most expensive ship in the galaxy!

I already said that this would have been a controversial concept… I’m open to discuss about this!

What do you think about these?
Will you criticize me for not finding the right ability balance?
Which do you like more and what you don’t?
What would you change?
Did I go too far?

What if it was 90% or more progress done in a wave? Would it does very very low damage?

As stated the Cruisers are unbalanced and the formula works the opposte I tought.

My idea behind is that on the early of waves these ship should deal a lot more damage but on the end should deal very lower damage than normal.