Chickens that randomly throws down a smokescreen grenade in the same manner as grenades thrown by Specil Forces. After a short delay after the first instance it touched the “ground,” the grenade will explode and will release a smokescreen that will block vision around it. The smoke area is a bit larger than those toxic clouds and isn’t lethal. The grenades aren’t lethal as well, they will just explode on ship contact. 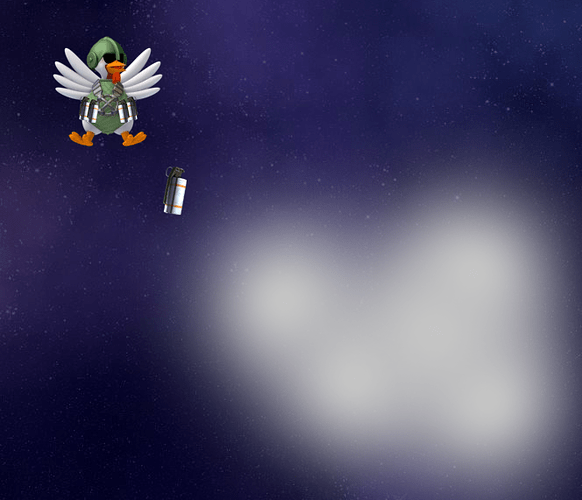 PS. The inside of the smoke area isn’t 100% opaque, you can still see your ship inside it. Unless you’re dumb enough to let them live for so long to make them spam those grenades.

And I guess the smokescreen gets destroyed by fire satellites or the Absolver Beam?

Same manner as those toxic clouds

This reminds me of shooter games.

The same behaviour said in the “ghost chicken” topic, and this behaviour is guaranteed death in those missions.

It’s not like they fire every second like the other elites. I don’t even classify it as one of them. You’ll just have to kill them fast enough before they attack. And don’t worry, they don’t spawn smokescreen upon death.

Well, it’s just a reminder that if we got hit by a smoke specially in those types of missions is guaranteed death but I will consider your point.