This is a series of small suggestions that I think would improve the overall gameplay experience of Chicken Invaders Universe, with the goal of making the game more consistent and intuitive. I may update this post from time to time as I continue playing and get more ideas.

Party Chicken - While this hasn’t been a threat to me yet, it feels somewhat strange to see the Party Chicken shoot out the ring of globs post-introduction phase, and its inconsistency can also catch people off-guard and lead to potential unfair deaths. In line with the idea of bosses emitting warnings before their attacks, I believe that Party Chicken should have the pink inward visual rays that it has when it first does the ring burst.
This will give the seemingly randomly done burst shots a better warning for when they appear. This will better establish consistency for first time players as well, as they will have established those pink inward rays with the ring burst and seeing it again will indicate to them that it is happening again. 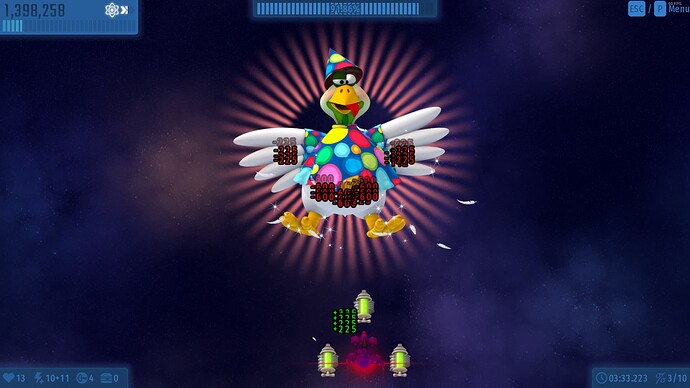 Tl;dr: When Party Chicken does the subsequent glob ring bursts after its intro, it should still have the pink inward indicator rays that it had when it first did the ring burst in its intro.

Dimensional Phase-Out - While this is a powerful ability, and there are several indicators that the ability is running out, such as the effect wearing off and a light ambient sound, I still feel like it can be hard to gauge when it is actually going to end, especially for people first trying out the ability. It can also be hard to see the visual effect clearly when you are amidst several hordes of chickens and projectiles. I think there should be an indicator sound that will play when the ability is about to end. This sound could be similar to the subtle beeping that plays when Planetary Egg City is about to attack, or it could even be some sort of bass-y sound that grows in volume as the ability comes to an end. Just something to give a better indicator for when it will be ending would be nice.

Weapons - I believe that weapons you buy at the Galactic Store should not have any sort of “quantity” to them. Instead, they should be a one time purchase that can be applied to multiple ships at once. Realistically, it is far more cost effective to just purchase one of each weapon. The only thing that the bought weapons having a quantity does is make it more inconvenient to switch out weapons when you want to switch ships, requiring you to go through multiple screens to get a weapon off of one ship to put onto a new one when you could just equip the weapon on multiple ships and bypass having to take it off of one of them entirely.
It’s a small thing, yes, but I find the quantity to be useless in its current state and I switch between my ships frequently depending on what kind of mission I’m doing.
If this change is introduced, anybody with multiple weapons purchased should maintain their highest upgraded weapon and receive a 100% key refund on all duplicate weapons that they lost.
This concept could be extended further to all of the ship equipment, like Heat Sinks and Engines, but I feel like that could be somewhat of a heavier topic.

Henperor’s Apprentice - This boss continues to stay easy and boring as mission difficulty increases. One simple thing that I think could at least make his fight a bit more interesting is to replace his AI with something similar to his “Chicken Exponentiality” AI at higher difficulties, except he still uses the 1-ring forcefield and not the 4-ring one.
Maybe he can also use the forcefield after every set of spinning lasers, unlike the Chicken Exponentiality version. Just having him move around would go a long way in making his fight more interesting and challenging at the endgame.

Alien Mothership - When it comes to score, this boss feels like a particularly big gamble sometimes. You need to pick up every gift and every atom to make the most out of this fight. I am perfectly fine with the fight being careful and slow, necessitating you take the boss out piece-by-piece and only go for heavy damage when it is at the top of the screen in order to minimize the amount of gifts and atoms rendered unobtainable by falling pieces or projectiles.
However, there are times in this fight where a piece and an item are dropped with near equal velocity, directly on top of one another, making it physically impossible to collect without something like a phase-out. This makes the potential of doing this fight optimally come down to randomness with item velocity, regardless of your skill level.
I propose this: Whenever the boss drops an item, do a calculation to ensure that item’s velocity is significantly different than the falling piece that spawned it. This would be a subtle yet appreciable fix to the problem.
This same concept can also be applied to "I’ll be back!"

Squawk Block - I think that these waves are mostly fine. They go from being relatively simple to basically being dominated by the Absolver. Whether or not that is by design I am not sure, but I ultimately think that is fine.
I only have one real problem: I think “Drone Chickens” (The ones that lay egg mines) should be
removed from the Squawk Block roster. Their mines can either be completely harmless or absolutely devastating depending on if they make it to the bottom of the screen, which feels somewhat unfair to me personally.

Please let me know what you guys think about these suggestions! All feedback, be it appreciative or critical, is important to me.

if you haven’t noticed it yet, party chicken does that ring attack every 3 stops, with the initial stop included

Right. I picked that up a bit ago, though it still does feel like it would just be better and more intuitive for him to have the warning indicator that is initially connected to the ring burst rather than to abandon it after the intro phase.

I’m surprised no other bosses are mentioned which have very similar inconsistencies. Mysteryous ship only has indicators for its first attack which makes it an identical case to party chicken. Henperor’s apprentice is opposite, it has no warning for its first forcefield but then it warns you for every other one. Space crab 2.0 absolutely never has any warnings for this despite using the same attack. Twice infinity doesn’t warn you when using its green attack during multiplicity despite doing so in normal fights(unless this has been changed in ciu but I don’t think so). If none of these are an issue then I see no reason why Party Chicken should be any different.