“One of our spies of the Universal Bureau of Inteligence has located an unprotected enemy hangar, and it has a ready-to-go ship on it. Your mission is bring it to our facilities, in order to reverse engineer some of their systems.” 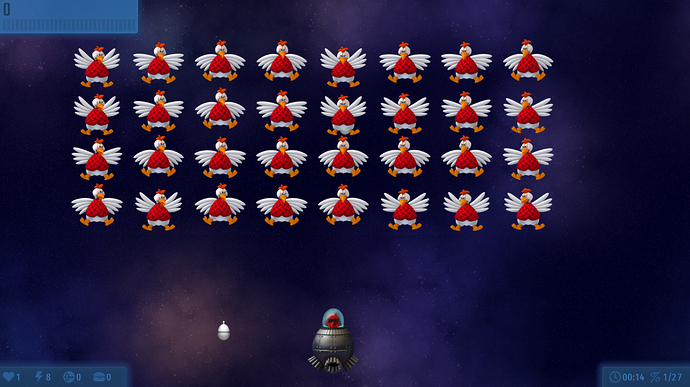 So, in this mission, you control an armored eggship. You start with zero firepower and the ship shoots the same than it does on enemy control (three lasers separated by 120º, one shot per second), and it gains power and firerate on power-ups as usual. When collecting a present, it copies some of the weapon’s behaivour, not all of them because the ship keeps the three cannons at 120º each (the projectile is still the same though). Note that while they are useless on front facing combat, a full copy of weapon’s behaivour would be overkill on a surround scenario, like chicken roulette and suchs.
About projectiles and lighting bolt, plasma rifle, position stream and laser cannon, they should be either disabled or cyan colored. I lean more towards the first option.

Another option would be, each time you get hit it goes through a damage phase, so you would have 4 hitpoints for each life with the ship getting more and more damaged. As such, only the fourth part of your lives mounted will be actually present on the mission (if you don’t carry extra lives, that’s a net gain), and we could have a special weapon limit too.

Is that cool spot in the cockpit?