Idk if this is worth making, but in this topic you can post your setups for the various mission types. I’ll start by listing my preferred spaceships for most mission types. (Most of those setups haven’t been tested, they are just theoretical strategies).

I don’t use consumables, so none of those are there, but if you do, feel free to include them.

Damage Amplifiers if you actually want to rush those.

Also, I use BX-9, Positron Stream and fire satellites.

Well I have a strat for earning points
I find a 40-wave, elite chicken invasion that I can probably get 80+ million points from, if I do get 80+ million from that mission, I’ll favorite it, then I’ll do the same mission once 12 hours have passed
As you can see from this image, I got 1.3 billion points and roughly 5 hours of flight time (and I still spent some time drawing chicks), the rank 1 person got 400 million more, but 10 hours of flight time which is almost twice as much as me, so I definitely have the better strat here, but not as much time 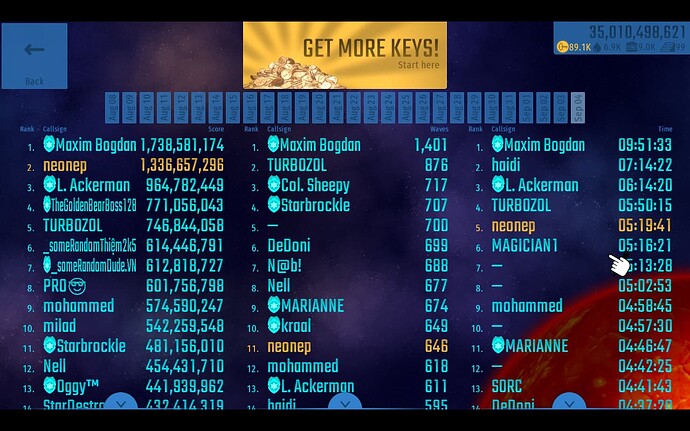 Now if you don’t have good gear, you can go for easier and shorter missions, then move up as you get better stuff
Btw, I have a squadron where I assign like 1 or 2 of these long elites a day (or even none) because these missions are not easy to find, so if you wanna join then let me know

My strategy at a glance:
I’m on a mission and shoot anything that moves
Always effective

I’ve collected the best gear, the only thing I miss is a bit of skill. But sure, I’ll join

I see what you did here.

Tip: You can win by not dying.

It works 100% of the time. Best one so far.
Credits: Sigma Putin

Here’s mine:
“Always stay low and far away from your enemies!”
“When in doubt, nuke the hell out of them!”
“Don’t hang around corners or death!”

Certain Bosses:
Military Chicken: “Time right and charge!” (with Absolver)
Yolk Star: “Brace for impact and stay in the middle!”
Sweater Chicken: “Don’t get sat on!”
Metal Egg: “Get stupidly close with your Positron and dodge the lasers!” (don’t get too close or you die)
Laser Robotic Crab: same thing with Metal Egg

Certain Enemies:
Cowards: “Get out the way of projectiles!”
Slobs: “Brace for impact and dodge and don’t use Riddler!”
Comets: “Avoid the U of death!”

Waves:
Among Us: “Check first then intervene!”
Feather Fields: “Shoot the bombs, not the feathers!” (everyone just clear the feathers losing a ton of points)

(everyone just clear the feathers losing a ton of points)

This is false. Coins obtained from feathers give significantly more points than just bombing the feathers. Obviously, you can do both for maximum score.

This applies to way more than just one boss, really.

Slobs: “ Brace for impact and dodge and don’t use Riddler! ”

Applies to a few other weapons like ions, too.

Cowards: “Get out the way of projectiles!”

This is as useful as “you can win by not dying.”

Some of your choices are…odd to say the least.

As someone who doesn’t use consumables much, I typically take these setups to each mission:

Chicken Invasion: M404, any weapon is fine.
Boss Rush/DT: M404, any weapon that’s not a spread weapon or Absolver is fine.
Squawk Block: M404 or BX-9, Absolver. Easiest way to beat the non-boss rounds. For the boss round if its max difficulty and you don’t have max Absolver then restart previous wave until you switch weapons. Plasma and Positron are the next best guns, and they easily destroy the boss.
Supernova: M404 or BX-9, Corn/Ions/Vulcan are the best, followed by Positron Stream and Hypergun.
Meteor Storm: M404, Corn/Ions/Vulcan rock here.
Comet Chase: Anything that isn’t a bomber, Vulcan & nothing else.
Feather Fields: M404 or BX-9, any weapon.
Key Rush: H&C101, any weapon is fine.