I think this idea has been partly suggested, but here’s my take on it. 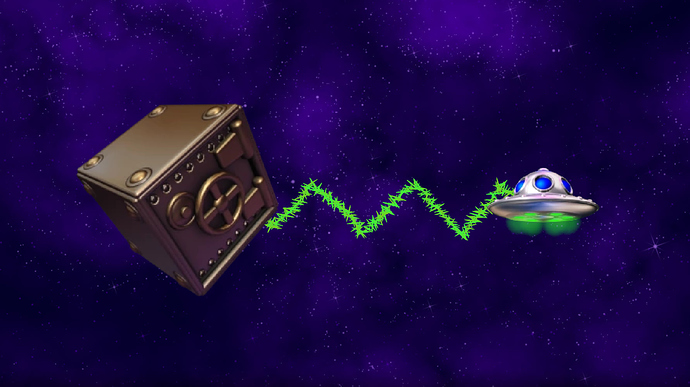 A UFO would be dragging along some kind of container, perhaps a alien container because both are aliens, but a unique texture wouldn’t hurt. Basically the NPC would fly around a single starsystem. He will not leave. However when a player raids/attacks the NPC, they are immediatly put in a mission (Perhaps with a warning). They aren’t allowed to pick and/or use any mountables and difficulty settings. Background and music could either be as last mission, unpickable or a tiny selection screen.
The mission is just the UFO carrying the container. The UFO is indestructible, but you can hit the container. Upon taking certain amounts of damage, it drops keys. The longer you fight it, the more it drops, but it has infinite health. 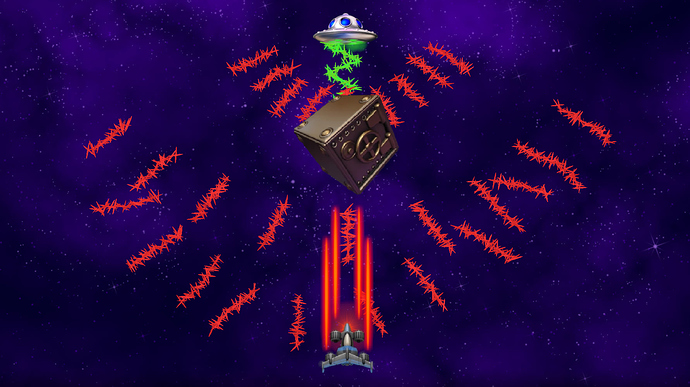 However the UFO isn’t defensless. It would continually shoot laser and do other attacks. The longer the mission goes on, the harder patterns it shoots as well as faster. The UFO can also move along the top of the screen, dragging along the container.
The mission can last at most 10 minutes, afterwhich the UFO speeds up and flies off, ending the mission. The more likely outcome is the player dies, ending the mission. He will not be able to raid the UFO again.
After an initial player raids the UFO, all players have 10 minutes to do so as well. They will join in with fewer time, but not having the mission harder, as it only gets harder for each player as time passes.
Once the UFO raid ends, he will fly into a random star system in a random constellation. However, the constellation must not have any other Travelling UFO’s in it already. So only 1 per constellation at most.
I suggest their total amount in the galaxy is pretty small, making them a rare and exciting sight!

Any questions, tweaks, ideas, criticism and better names are welcome!

I take it you’d ﬅart off with no ſpare lives?

Yes, that’s mostly the point of no mountables, as well as having equal chances (In case something like a dimensional phase out would net you more keys than you lose)

what if the ufo also spammed it’s original laser attack from close encounters?

Oh I LOVE this. We could definitely have raid-type co-op missions in CIU.
My idea was similar to this, like having a big chicken or one of the final bosses (Henterprise, Egg Cannon or Yolk Star) and several players raiding it. The boss would have an enormous amount of health, and fights would last for several minutes, then the boss would retreat and the damage is calculated (battle also ends if the player dies, so no lives are allowed to be equipped). Fight again until all players together destroy the boss, or if the pre-specified raid time runs out, resulting in a defeat (score penalty).