Description: Scientists of the Heroes Academy have developed yet another bizzare weapon (that makes a Corn Shotgun like a normal weapon). By petrifying precisely selected types of bran, a weapon in a shape of hammer has been created. Tests have shown that with one mighty swing it can make even enormous asteroids crack open and, strangely enough, lures all avian perpetrators closer to a person holding it.

When you click/tap, a hammer made of petrified bran swings at a 180 degree area from left to right or vice versa (damaging everything in its path). You can also hold the mouse button for 4 seconds, the hammer will be thrown like a boomerang after releasing the mouse button.

The more Heat Gauge is filled, the faster you will swing the hammer, but also the less stable it becomes, which makes it also weaker and stronger at the same time in the process.

At 0% to 20% of Heat Gauge, the Bran Hammer is in its Stable Form - which means only swings/ boomerang throws are main sources of damage.

At 20% to 75% of Heat Gauge, the Bran Hammer starts to crack from overheating. In its Cracked Form, the hammer will swing faster and three hardened bran particles, titled Bran Rocks, will start coming from it in the process.

They (Bran Rocks) are being shot at random angle located in 180 degree area of hammer’s swing.

The boomerang throw’s loading time is shortened by one second and the hammer itself can break itself after hitting enemies ten times before it breaks into eight Bran Rocks (fired in the omnidirectional pattern from the place where the Bran Hammer has broken). Additionally, two Bran Rocks are fired in V pattern after performed throw.

At 80% to almost 100% of Heat Gauge, the Bran Hammer reaches the Unstable Form, making its swings even faster and two more Bran Rocks are flying from it (that means 5 Bran Rocks per swing).

The throw takes two seconds now, but it behaves differently (meaning it will not return to spaceship).
After performed throw, the hammer behaves like a projectile. Upon contact with the enemy/obstacle, the hammer breaks itself into sixteen Bran Rocks fired in ‘16-point direction’ pattern from the place the Hammer broke and also does the small AoE attack.

At 100% of Heat Gauge, the hammer breaks itself and reappears when Heat Gauge is depleted to 0%. If you will break your hammer earlier (in Cracked Form) or the unstable hammer does (or does not) hit the enemy, then the currently filled Heat Gauge will also deplete to 0% and does not excludes you from achieving “no overheat” medal.

The inspiration behind the idea:

The Bran Hammer is heavily inspired by The Binding Of Isaac: Rebirth’s AfterBirth+ character: The Forgotten. This weapon(?) is specifically designed to make a use of Heat Gauge in a strategic way (the potential is dependable from your playstyle and preferences).The boost is excluded to not make it overpowered (so you’re gonna play with this like The Absolver Beam).

Is there something I should fix or add? Let me know in the comments

EDIT: Here’s some rough-looking concept art for said weapon and as well as its attacks…

You have been warned: 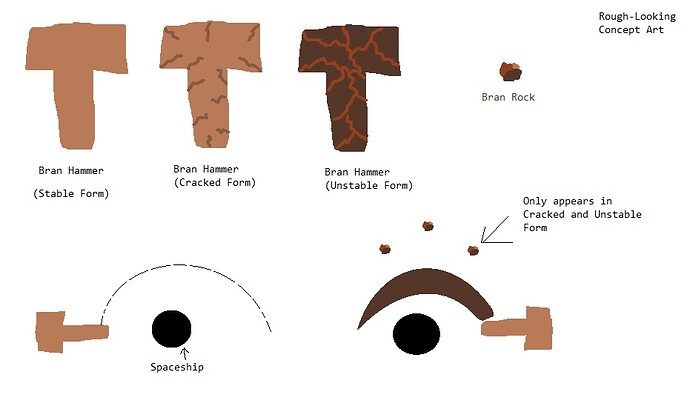 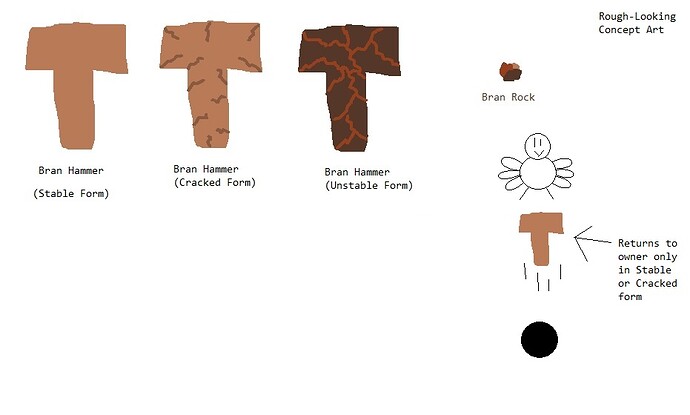 it’s a duty in every idea (especially for introducing new things) (in my opinion, of course)

Ok, but I am not the artist, so do not expect amazing graphics

it’s a duty in every idea (especially for introducing new things) (in my opinion, of course)

Calm down. probably he did because he completely understood the idea and it would be unnecessary for him to view picture of it