This wave consists of wormholes (many of them) distributed evenly on the screen with four anomaly zones pointing at the center. The wormholes should be spacious enough for 2 bombers to fit between them.

Terminator chickens will spawn from these wormholes randomly that will endlessly chase the player. The maximum number of chickens on the screen depends on the difficulty.

Each unique mission will a random spawn order but it won’t be randomized on multiple runs/each player doing such mission. So it’ll be the same spawn order on Competitive Missions for fairness sake. 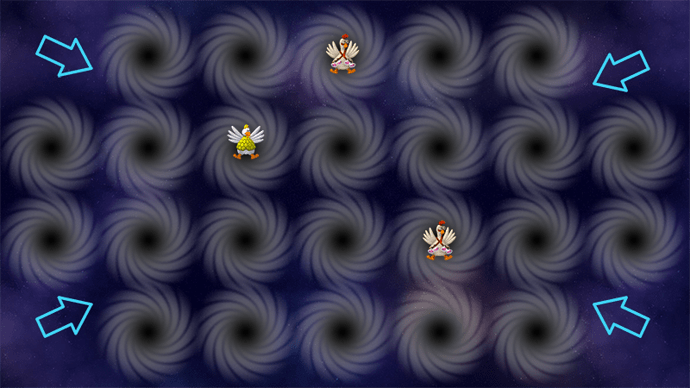 You took this wave idea from that Indie horror game didn’t you? Lol.

But I see 2 problems, both related to how chickens may spawn:

There are 4 anomalies he mentioned that chickens doesn’t spawn at them. So I don’t think those problems are big deal.

I see. So removing those 4 blackholes at the edges of the screen would solve it?

If spawn position are randomized each wave: You may get killed by a random chicken that just spawned

If spawn position are randomized each wave: You can spawnkill the chickens and trivialize the wave

Slobs/Cowards would like to say hi.
Actually made some changes on how chickens will spawn, in short it would take a few runs to memorize their spawn order. You wouldn’t be able to do this on dailies unless you have an alt.

There are 4 anomalies he mentioned that chickens doesn’t spawn at them. So I don’t think those problems are big deal.

Yeah, pretty much the safe zone of the wave as well.