The wave itself is shaped as a UFO which consists of enemies, mainly UFO’s. It moves the same way as the Alien Mothership.

A part of the UFO consists of only one enemy type, which as follows:
Saucer - UFO chickens/UFO chicks
LED - Fester
Head - Enemies other than UFO’s (except gatling/laser)
Turret - Gatling/laser chick 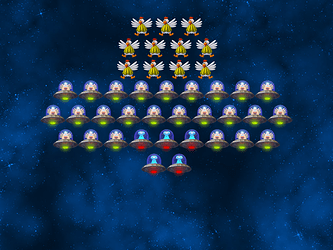 Its harder variant has turrets attached to it: 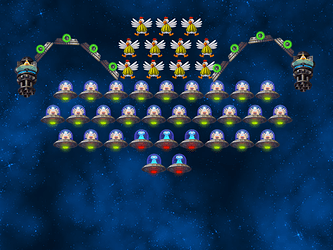 this is helluva pain

For the title, iA cloud maybe add the ² sign as a texture

I think it should be surrounded by barriers

² is printable, it even has an alt code. Why would the texture be needed?

It’s not needed then

this is the most destructive wave ive ever seen
Good idea!!!

Just why you bumped?

Your post is ten times more annoying than the bump itself. Also, it’s not a bump if it’s within 14 days, some people can only check forums irregularly.

I’d say both of those posts were quite unnecessary.