Seeing all these new upcoming waves getting added in the next patch, and all the new ideas being put forward, encouraged me to have a go at coming up with a new wave myself. And here is my first one: Introducing The Sitting Cluck! 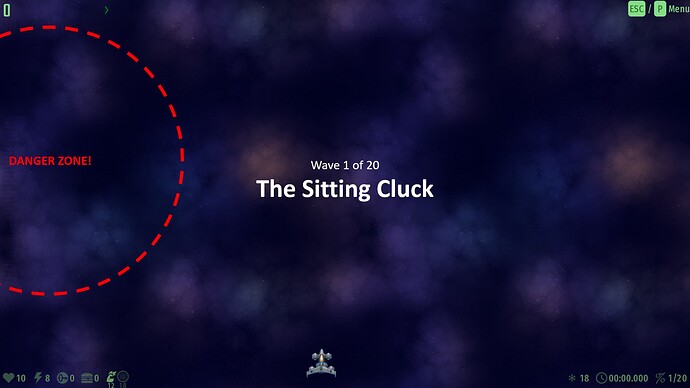 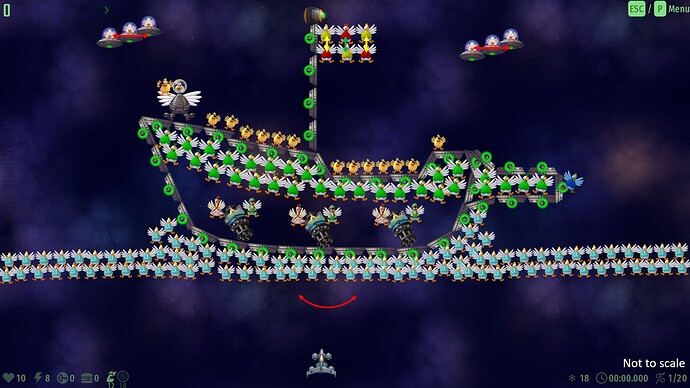 As you can see, it’s based off of a sailing ship. It will quickly swoop in from the left side of the screen, hence the Danger Zone. This one is hostile however, and will try to unload its Gatling guns into your ship. I tried to go for as much symbolism as possible here:

The Chickenaut is the captain and the Assassin chick its pet parrot. The Pirate Chicks are the crew.

The Alchemist and Pilot Chickens represent the two-man team reloading and firing the cannons.

The lone Coward at the tip represents the mermaid statue typically seen at the front of fictional ships.

The Chick UFOs are (well, meant to) presentative of seagulls flying high above the ship. They slowly move left and right slightly across the screen.

The red and yellow chickens on top of the mast is a flag. The chickens making up the flag move up and down to give the impression of the flag waving in the breeze.

The red curved arrow represents the movement of the whole ship, so it rocks back and forth as it sails across the sea. As for if the “water” moves up and down alongside the ship, I think it would be a nice feature but it might be a bit hard to implement. One thing I would suggest for the ship’s movement is to make it rock back and forth more on higher difficulties, like it’s sailing across stormy seas.

The green chickens are just filler, since the ship would otherwise mostly be empty space.

On higher difficulties, I suggest:

1. Adding more Gatling guns to the ship, up to a total of five.
2. Making the ship rock back and forth more erratically, like it’s sailing on rough or stormy seas.
3. Replacing the armour chickens making up the water with Cowards (bit much?).
4. Replacing the Pirate Chick crew with tougher enemies, up to grey Metal Suit chickens

This is my first idea, and I know there’s a lot of improvements and refinements I can make to it. Once again, if anyone has an idea for how this can be refined, please say so in the comments. I’ll leave an opinion poll at the end of this post, please be honest! Anyway, that’s it from me for now, I’ll continue to try brainstorming more wave ideas. Be well and Peace!

pirates of the galaxy