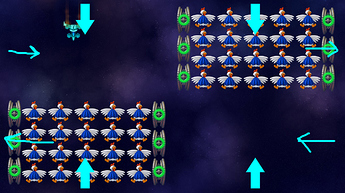 S11366×768 348 KB
A variation of the wave “Shear Stress” that is added recently. The difference is that there’s 4 “direction-changing” nodes (if that’s how should it be called) instead of 2. The upper group of enemies move from left to right and the lower one move from right to left. Once an enemy/barrier disappear from screen, they respawn on the opposite side. 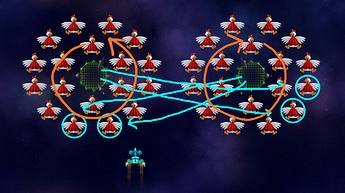 S21366×768 416 KB
Features 2 portals, one on the left side and the other on the right side. Enemies spawned from one portal places themselves around the opposite portal and encircles it. When an enemy is killed, another one will be spawned immediately from the portal on the opposite side. The dress color of the chickens on the right side are supposed to be blue, representing the (–) side. 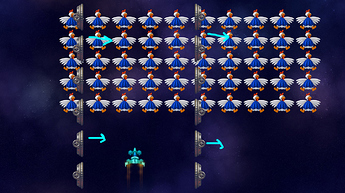 S31366×768 363 KB
Your usual block invasion wave but you’re in between two columns of indestructible barriers that restricts your movement and firing area. These colums move from left to right then bounces back from right to left after the right column reached the rightmost side of the screen. 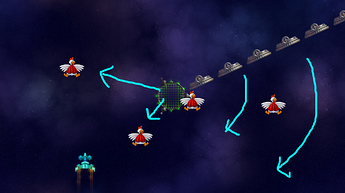 S41366×768 204 KB
Features a portal and a column of indestructible barriers in which one side is “attached” on that portal. The portal acts as a “pivot” in which the column rotates. Enemies are spawned one by one and places themselves randomly on the screen but not near the portal itself nor the bottom of the screen. Difficulty determines the maximum no. of enemies that can be on the screen at the same time. 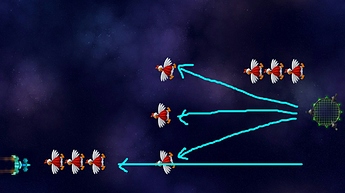 S51366×768 386 KB
This portal “fires chickens” at you periodically. The chickens spawned are grouped by three, either “focused” (forming a line) or “spread” (spread evenly). Addressing similar problem on The Chicken Flute, the next group of enemies are immediately spawned if the player killed all of the previous ones. The portal moves up and down and is fixed laterally on the right side. Difficulty determines the no. of enemies in a group that is “fired” by the portal at a time.

I won’t stop suggesting stuffs until any of my ideas gets added. I probably needed to see them in-game if they’re actually viable waves.

Damn why do all these ideas make me interested in portals and barriers?

Damn why do all these ideas make me interested in portals and barriers?

You can suggest more waves, but don’t make it too much that it will be called “Barrier Invaders.”

Thanks for adding these waves, I’m looking forward on how they’ll look on the next version.

it was only taking time to code it I guess.

Nice, keep up the perfect work!