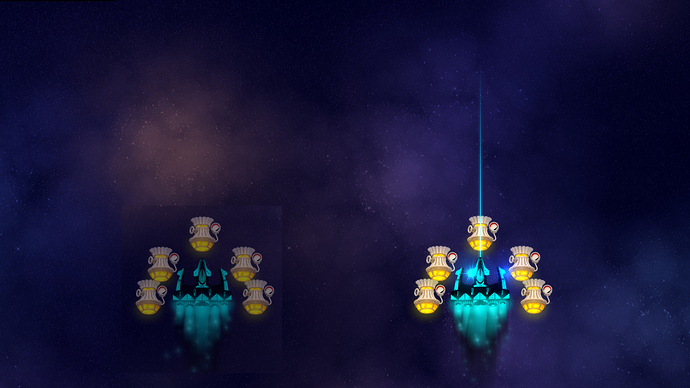 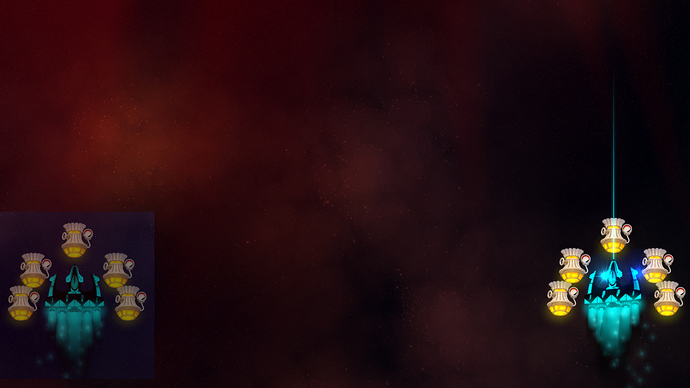 The mirror is active for 10 seconds and will replicate your movement and shooting, including satellites. It can pick up gifts, bonuses and food as well. The mirror won’t be destroyed on hit and by ramming, but will disappear if your actual spacecraft is destroyed. It will also not duplicate other special weapons - they only come out of your actual spacecraft, so you’ll only shoot one missile and only your actual spacecraft will get 3x damage from Damage Amplifier. Regarding behavior of stacking multiple Mirror Images, an option would be to swap positions between the mirror and the actual spacecraft if another Mirror Image is activated while a mirror is already online (on top of extending the duration, like Damage Amplifier or Phase-out).
The mirrored spacecraft does not duplicate the hardpoints as seen on the pictures above, and for other visual effects I’d add some glitchy hologram effect that speeds up when it’s close to disappearing, tho as you can see from the pictures, my editing skills are nonexistent.
The price could be a bit lower than a Damage Amplifier because it’s still only x2 damage but it affects satellites too which is pretty big, and has other benefits like picking up items and enabling safe reach for risky areas. Now I’m not really sure how much the player benefits from the chickens targeting the mirror instead of the real player but I feel like having terminators always go for the mirror should be benefiting in most cases. Maybe cowards too. Another option is to make enemies only target the mirror when they are in the same half of the screen as the mirror, and otherwise target the actual spacecraft. (AKA target the closer ship)

What happens when multiple mirror images are employed? Does it increaſe the time (like amps)?

I’ve thought of swapping the places of the mirror and the actual spacecraft when we activate the superweapon while a mirror is already present (and obviously increase the duration, like amps). A nice little gimmick that can sometimes save your life. Will edit the original post, thank you for reminding me.

Another thing I thought of, regarding enemies targeting the mirror, was to make enemies target the mirror only if they are in the same half of the screen, while the other half targets your actual spacecraft.