Henperor’s Apprentice:
Penta Lasers
Instead counterclockwise, lasers will rotate clockwise (Randomly or as a replacement)

Party Chicken:
I think “Spread Waste” can be repeat regularly (not only once)

Master Squawker:
Add the possibility of falling in the lowest row (For example, during the transition from the top to the bottom row) 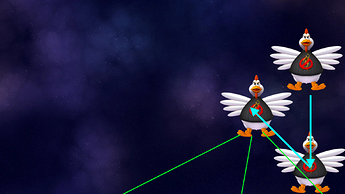 Magnetic Manipulator:
Changes the direction the player is facing.

Super-Chick in Chicken Multiplicity
Quadruple Laser
Instead counterclockwise, lasers will rotate clockwise (Randomly or as a replacement)

Iron Chef:
After each -20% HP,
Food Throw and Food Spread are getting faster
or appear +4 or +5 fruits in Food Spread