Firstly, credit to @AnasWael for suggesting this idea in the forum!

Here is an image of this boss (again, thanks to @AnasWael for making such good art). 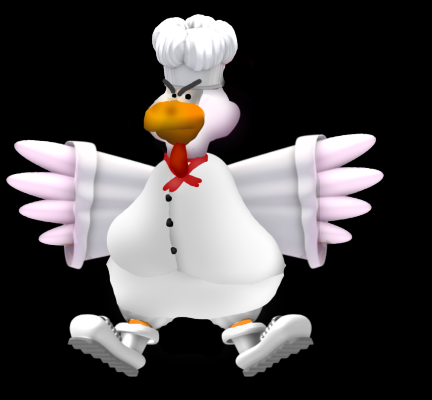 The Chef Chicken should be the 2nd variant of bosses in Droid Raid missions - the supposed “assistant” of the Iron Chef.

(Just like “I’ll Be Back”, but in Space Burger raids).
He appears at difficulties above 70%, and here are his attacks:

He also drops more food items than usual - up to 200 food items.
Every 20% health depleted, he drops a random powerup.

All other special missions like Supernovas and comets have 2 own bosses, so I don’t think this will make no sense if it cooperates. Also logically it is a chicken of food which is the point of droid raids afaik.

Droid raids exist? If so, sure, so long as it’s not too similar to Robochef (seems different enough to me)

Cool finally there is new Boss to food missions

Since when are food missions or droid raids a thing…do you need a certain difficulty for these, etc?

Iron chef and droids are not working with galactic henpire, but still they are UHF enemies

Droid raids have been in the game for a while.

I’ve never ever come across one