Yet another boss concept here!
This time is time to show to you the mecha chicken. 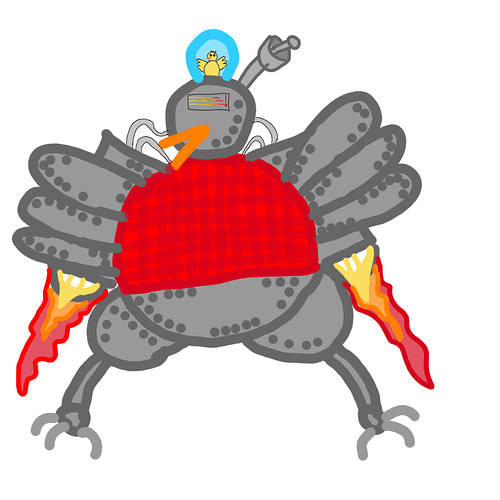 This boss is pretty peculiar since it has 2 phases.
On the first (that is 99.9% of the battle) it looks like the picture above.
So it is a robot controlled by a basic chick.
It is equipped with a jetpack.
The eyes are replaced with a reactive health bar

Hp:250 000 (A lot but not so much)
Weakness: Electric-based weapons (is made in metal so it makes sense to be an electric conductor)
Resistences: None

1)JETPACK
The mecha’s jetpack flares by default can hurt you limiting your movement.
Sometimes the flare “flashes” and then it becomes longer. (Kinda Henterprise laser but easier to avoid)

2)WING-ROKETS
It’s self explainatory: the wings aren’t made for Flying prupose but are part of a balistic complex.
They don’t aim to your direction
Image:

5)EMP
The chicken will launch a emp granade that after its explosion will generate for 3 seconds a small area where you will get a death (Initially I was thinking about an inability to shot there… but how to not cause bug if implementing it?)

The Chick will remain into his escape pod just to attack You
It won’t move fast:

Only attack:10 Missiles with a round pattern (blast from the past-like) will be immediatly shoted and repeated every 2 seconds

it kinda looks like my boss idea that i never posted on this forum. btw i really like the idea

@Traveller
Something like a passage between these two images
Normal:

It’s the point:without the mecha the chick will be “harmless” but still hard due to an insane amount of missiles
But Maybe Yes, is a bit too low hp
5000 may be a solution?

My point was that it’d be impossible for anything to be eaſiër to dodge than the Henterpriſe laſer.

Obliviously the flare won’t be as big as that laser!
I said

(Wow… we can quote ourself)
To simply explain that before there will be a visual sign to express the boss’s will to attack.

With that amount of hp, instantaneous weapons (plasma, lightning) do kill it in a few shots.

Also the chick could practically fire a limited amount of missiles due to its small size. Unless those missiles do explode on screen and their AOE is huge enough.

With that amount of hp, instantaneous weapons (plasma, lightning) do kill it in a few shots