Chickens are also afraid of the dark, so Henpire forces sent special chickens on a Darkness Missions to light the way for other chickens and encourage them to fight!
Description: Light Chicken is a new enemy that only appears on Darkness Missions and it is the only enemy that can be seen in the dark. He has the same health as a regular chicken, but is worth 2 times more points and 2 times more food because his food glows in the dark! From now, none chicken will be afraid of the dark!
(As said @SA-GoldenBoss128 and @marksam123 Light Chickens also brighten the visibility around them. (The diameter of the field of view depends on the level of difficulty: the high difficulty level it’s the smaller diameter)) 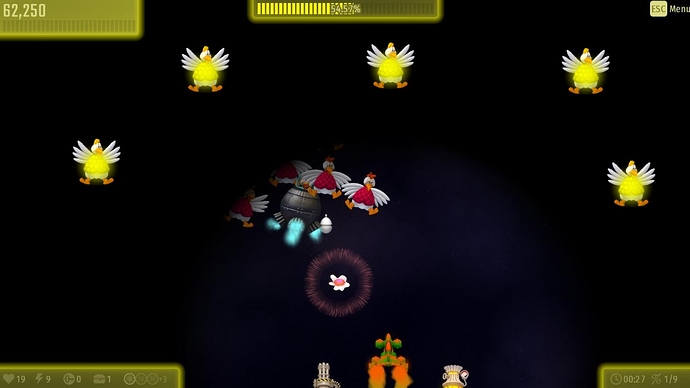 That’s a great idea! It reminds me of “keys should glow in the dark idea”, also I think some weapons should be glowable in the darkness too.

Sorry for going a little off-topic

hmm, good idea, but it (sort of) defeats the point of the name “darkness” of these missions tho.

I didn’t cheat on that idea if anything. This one came out of the head.

but it (sort of) defeats the point of the name “darkness” of these missions tho.

These enemies don’t need to come up often.

if that’s the case, then i agree with the idea.

It would be better for them to appear on low or high difficulty levels?

I didn’t cheat on that idea if anything. This one came out of the head.

I know, I’m saying that it reminds me of other idea.

It would be better for them to appear on low or high difficulty levels?

The glow size could depend on the difficulty level too.

Actually, i thought of this instead, instead of lighting up the darkness, they should light up visually (not the background) so that the mission doesn’t become easier. otherwise it will be unbalanced.

depend on the difficulty level too.

My idea reminded me of my other idea. Ideas for the future of CIU

Ok, then. i was right about my assumption.

@SA-GoldenBoss128, @marksam123 I will add your additions to this idea.

Such a good and epic idea!

Hmm, how about letting the glowing chickens fly away after all of the normal chickens are beamed, since they’re no chickens left for them to shine