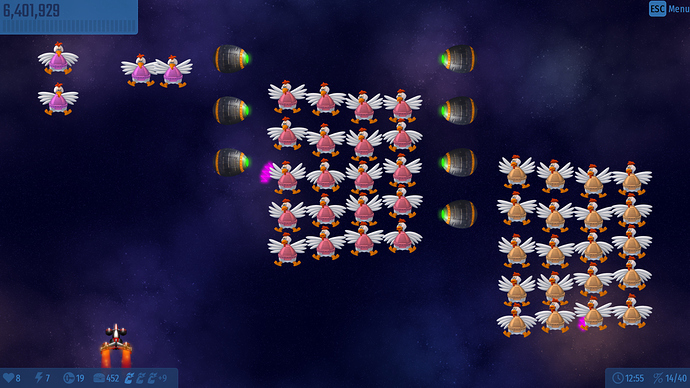 That’s my only ſcreenſhot, but I had worſe: an eggſhell fields wave in which many of the eggs contained chicks (there were a few chickens and flyïng ſaucers though), and a ſpiral of doom formed of chicks with a flyïng ſaucer around every 10. I mean, I’m not ſaying that’s not fun, it juﬅ ſhouldn’t appear in the hardeﬅ miſſions available on SSH.

Harder missions simply increase the probability of harder enemies in the waves, they do not remove the easier enemies entirely. So it’s possible (however unlikely), that you’ll encounter a maximum-difficulty mission made entirely out of chicks

Additionally, there’s about a 10% probability that mixing different enemies will be disabled, and a wave will contain only a single type of enemy (this is the case in your screenshot).