While playing the Space Race, I noticed that this one specific weapon is under the explosion after defeating The Iron Chef (the one next to the pink one) 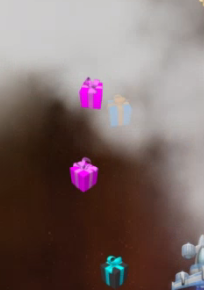 Not sure if any other weapons are affected.

Probably the Lightning Fryer could get affected too

I think I figured out how it works. The weapons that are dropped by the boss because of the damage dealt (like lets say the boss drops a weapon at 90%) are UNDER the explosion of the boss, whereas the weapons dropped after the boss is killed, are on top of it. @InterAction_studios Could you confirm this? If that’s the case, then this is pretty inconsistent in my opinion, and should be changed. The description for Tone down effects says that power-ups are never hidden, and assuming a weapon is a power-up, yeah…

They’re supposed to appear on top of explosions and similar BUT under chickens in my opinion, including bosses

That’s impossible because explosions are being drawn on the layer above the one which draws bosses.

Then the description of this option shouldnt say that theyre never hidden then.

Alternatively, make it so that when a boss dies, the already dropped presents from the same boss appear on top of ONLY the explosion that the same boss has caused. So they would work like the weapons spawned after defeating him