This type of enemy is inspired by Frozen Chick, Ice Comets and Eggs. 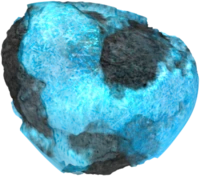 The chickens will be trapped in a brown-yellow cube represent the amber, just like Frozen Chick. The amber cubes are thrown vertically from above or diagonally from the sides. They are cracked and bounce on impact with screen edges or when shooted like Ice Comets. Eventually, the chickens inside are released and fly freely like hatched eggs.

The chickens parachuting slowly from above down.

They might hold an umberella instead. When being shooted, they will hold the umberalla downward to block the firing and fall much faster. The umberellas are hard but they have limited health (destructible).

Some planets are used to build military bases for the chickens. Some types of enemies used in CI3 can be shooted throughout the chicken invader missions (missles, eggships, U.C.O, egg-drone… like the lightning in electric environment).

After finishing all the chicken invader missions, the last mission is unlocked and allowing we raid the military base. In this type of mission, all chickens are military or high-tech (using guns, armored…) and the final boss will be Special Force (buffed difficulty).

Parachute chickens are basically balloon chickens.
Using guns, Dude. This is basically a kids game, youre basically turning this game into Fortnite.