I cant think up a name please help

basically a smaller interdimensional portal that can be destroyed 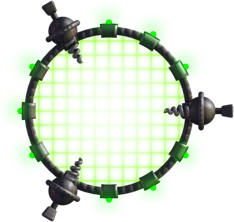 so what does it do???
Basically spawns enemies until it gets destroyed, but it’s always limited on some waves, it’s also a exception to classic invasion waves (it can appear in treble trouble despite that all the same enemies should be on the lines, also can replace a barrier in a barrier wave) and if you destroy two enemies in these classic invasion waves (and other waves) the thing would spawn them back again, and if you kill them again, they come back via this thing until you destroy the thing completely, in all waves it’s 25% more common than bombs, plus it only appears on 75%+ difficulty and SSH (including these 2 skill levels above it)
what enemies does it spawn?
here’s a list for your needs:

how exactly does this make the game harder??
well, it doesn’t appear on the waves like pulsating grid or chicken roulette at all… but appears on bosses that spawns enemies (INCLUDING THE YOLK-STAR! minus gatling guns and aliens and bombs and eggs)
on which missions does it spawn?

thats all (for now.) and also help me with the name please
EDIT: deleted the CI3 UFOS because it would be extreme

I still partly understand the spawning mechanics, but no. Something like the roulette wave with gatling guns and spawners isnt difficult, its unfair if not impossible. If it were to spawn on a wave like from cover to cover in the corner instead of a barrier, it will be impossible for some weapons. I don’t think spawners in random waves are good because they can tip the balance from difficult to impssible due to how some waves are designed. Thats why they need their own waves. If this thing had designed waves for inifinite chickens, I could be up for it, as long as it is still possible even with just a 0 power lightning fryer. All waves must be completable if the player is perfect. Thus in the end I think even in its own waves it couldnt block itself with chickens to be possible.

how about we restrict it from these waves?

That could theoretically work, but IA would need to test many waves to see what and where the spawner and the spawned do or go.

i mean, in the idea i already suggested it being on 75%+ difficulty, what do you think about restricting it also to SSH?

I guess, though I dont mind it