The idea for this mission is simple. There is only 1 wave, but it’s extremely long. The wave would consist of many enemy formations slowly coming towards you, meaning that this would certainly require a huge zoom level(at least 300%). Could be straight lines, curved waves, or any other shape there is.
During the mission, there may also occasional asteroids or comets, for which you would be warned beforehand. There shouldn’t be too many of them, of course, but with a huge zoom level, I think it should be certainly possible to mix them up with regular enemies.
At the end of the entire wave, there would be one(or even a few!) bosses that would, much like the rest of the enemies, slowly come towards you. Obviously, this means that many of the bosses would have to be banned from this mission type, for example final bosses. But stuff like planetary egg city, alien mother ship, mother-hen ship and similar could certainly work, albeit with slightly different attack patterns. The image below should demonstrate what this mission would look like(or rather, the end of the mission. Obviously the entire mission would be much, much longer than this). 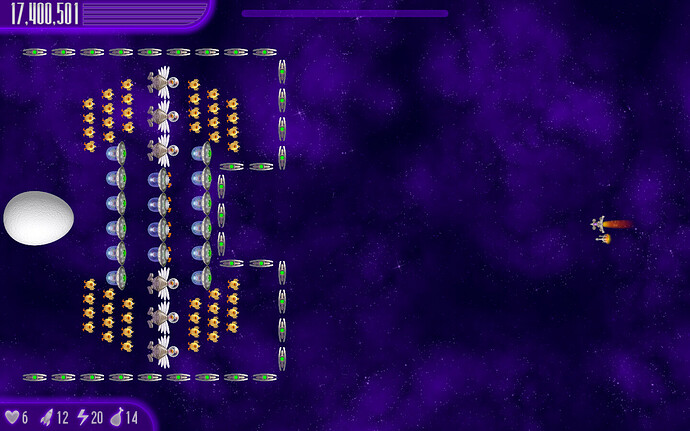 CI4 2021-10-26 20-33-11-0781440×900 334 KB
Ignore the fact that all the sprites are from ci4, that’s just because I felt lazy, lol.
Now, I haven’t decided on the name yet, so I’d like to hear some suggestions on this. Descension is just a placeholder. You can also feel free to suggest which bosses could fit here and what attack patterns they should have. For example, egg city could probably be changed to fire its instant lasers in all directions instead of just in front of itself.
Lastly, yes, I know the enemies are coming from the left and not from the top, unlike what the name would suggest. This is just because the game wouldn’t be able to fit in nearly as many enemies if they came from the top.
Edit:changed name to heavy onslaught due to the poll results
32 Likes
VerMishelb October 27, 2021, 12:11pm #3

If it’s a single wave, you’ll be dropped to the beginning upon disconnection. Will there be checkpoints or something?

Sure, I don’t mind. There could be several checkpoints during the mission at specific %s. Could be more of them the longer the mission is.

I think that some chickens should move at different speeds to break up the formation, making it more dynamic than just a row of chickens slowing chickens. I’m thinking of stuff like eggs that fall very fast in the direction of the player that release a free-moving chicken when broken, also it could have overlapping formations. I personally would love to see a continuous formation with patterns that merge into each other to contrast the really segmented wave-focused gameplay of chicken invasions. Has a lot of potential for interesting gameplay tbh.

A really cool idea with a lot of potential. Along with some asteroids, comets and such, maybe there should also be chicken formations that will try to flank the player and make things even more interesting, imagine seeing a long ricochet, cage, cherry bomb or even a panzer formation coming from the north, south and even behind the player.

I do wonder, if it would be possible if such a wave was formed out of “segments” with different chicken emplacements and stuff, with the game loading up different segments for every checkpoint. Some segments could also have Gatling guns and laser guns.

As for the name. I came up with:

Sure, there could be stuff coming from different directions, tho I think they should be more rare than the regular formations that come from the front (or in this case, left) all the time.
I really like the heavy onslaught name, tho I’ll put up a poll to see what others like.

Which name should be used for this mission type?

And yes, I’d definitely want chick gatling guns/laser guns to be thrown in somewhere.
As for Enhawk’s suggestions, yeah, got no objections really.