I was doing the occasional feather field mission when I encountered something rather odd, it was a whole bunch of feathers clumped up together… I fired my standard weapon, the Positron Stream and it took some time to destroy them, but man the POOF was worth it! The cluster disintegrated into a bunch of feathers and a purseload of coins also fell. I pushed away the feathers and collected the coins and wondered, are there any more of these things?.. The rest of the mission had no such freak obstacles and tbh, it was boring, I don’t particularly like feather fields as much as Supernovae or Comet chases.

I then spent a while looking around for more Feather field missions, and I found another but, well it wasn’t there, the next feather field also was standard, and the next and the next and so on… Where are these feather clusters?! I’ve searched nearly half a constellation for those Feather clusters! They were fun to kill, the POOF alone was worth it! Sigh… I I guess Feather fields are still their old boring selves… Back to chicken hunting I guess…

Sorry for the long Flavor text, it is a relatively simple idea but I got kinda carried away with making the flavor text.

Feather Balls, or Clusters are a group of feathers clumped up together into a single unit, they have their own dedicated wave although I guess you could incorporate them into regular feather field waves as well (Please don’t add them in Henpire Ambush, it’s going to cause a LOT of paint to most players).

Featherballs aren’t an instant kill by most weapons and at 100% difficulty, they should be able to shrug off a strong Absolver Beam charge, which does 11475 damage at

10, aka at 100% difficulty, they should have around 12000-14000 hp each. Now of course these numbers are a rough estimate of how tough they should be, so it might need further tweaking. To compensate for their relatively high durability, they move rather slow, about 50-80% of the feather speed in feather fields. And as for how many there are, well around 10-16 in each wave might suffice, but these stats might also need tweaking. 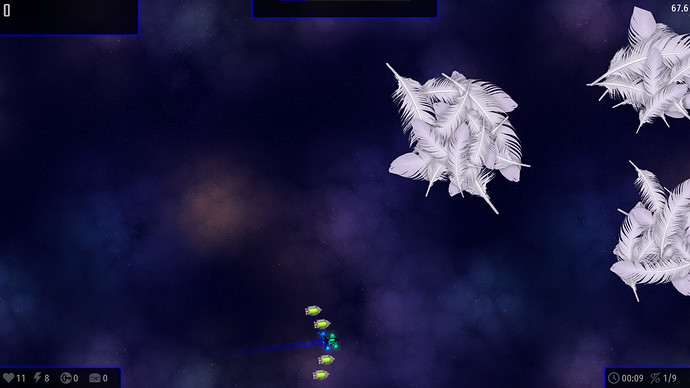 When they are destroyed, they drop some coins and 6-10 feathers. The feathers will be flung rather fast, about 1.5 times as fast as the Henterprise’s blue Ions (once again, tweakable numbers). 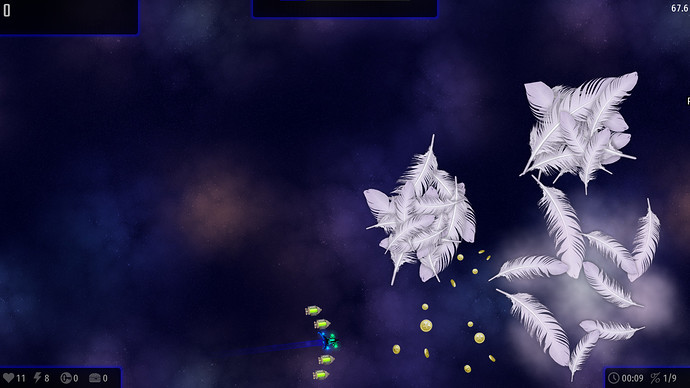 I really want to emphasize how important it is for iA to make the explosion visual and sound effects as satisfying as possible, since I kinda wanted an ASMR wave of sorts.

As for the inspiration, I suddenly thought about the wave “Pillow Fight”, which is just another name for a regular feather field wave, and I though about adding pillows that could be destroyed by the player. But then I thought about it and realized that there was no real reason to pillows, since it doesn’t match the theme of any CI stuff and well, I’ve yet to receive any confirmation that the feather fields are actually a dumping site for giant space pillows. So I came up with a ball of feathers.

I also have to mention that @Kylo-Hen did mention a cluster of feathers, so the ownership of the idea medal for this idea might be put into question:

Probably because, for someone new to Chicken Invaders, some of them might not make much sense without the context of the original episodes - for example, why would U.C.O. No.4 be in meteor storm when the other three aren’t? I am not at all against the idea, but I think that there should in that case be at least a small pool of potential bosses. Certainly only having one boss per category at the moment gets repetitive when you play a few so I’d like to see some diversity - but it shouldn’t feel…

Honestly, why stop at featherballs? There can be more things; like for example spinner feathers: appearing in the middle of a wave and spin fats through the field. This is just an example of how those environmental missions can be diversified: there are so many ways in which it can be done.

I kinda wanted an ASMR

I also have to mention that @Kylo-Hen did mention a cluster of feathers, so the ownership of the idea medal for this idea might be put into question:

I was talking about on the galaxy map - I suggested them in the same sense that “Asteroid Belts” are where you find Meteor Storms, and “Feather Fields” could be at… well, feather fields.

So it’s a distinct idea. And even if it wasn’t, I don’t really care about medals anyway. So you’re well and truly entitled to it if this gets added.