It shows a tick when i was looking for academys, and it popped up on where I didnt explore

If a enemy drop 3 coins, would it count for the 90% coin collection medal in a single wave?

They might have been testing with alts, who knows.

Implementing it will be the pain though.

That was my reaction, too

I don’t understand very well what overdrive is.

Yes it is. If less than 10 have spawned, these medals are disabled

bruh why not this

Implementing it will be the pain though.

That was my reaction, too

Ah well. I suspected as much.

Yes it is. If less than 10 have spawned, these medals are disabled

Was that true back in CI3? I always remember struggling to get the coin medal in that one more than the rest of the games.

In CI3, the coin medal was per wave. Which means that 10 coins had to spawn in a single wave, which (come to think of it) is unlikely.

When the player lose his last life, is he supposed to pause the game?

@InterAction_studios also in this daily challenge hard in the first wave, if you didn’t kill the chickenaut and left it to leave the screen, it will disappear while part of it is still onscreen.

When the player lose his last life, is he supposed to pause the game?

So if he end session will he start again? And if he surrendered will it count as defeated mission?

Secondly, I don’t see what you describe (which is really just hitting the maximum drop limit for each wave) as a problem. The chickens are carrying the same things, it’s only a matter of strategy/approach whether you get them or not. By the same token, you wouldn’t get the same things if you let one chicken escape, but who’s fault is that?

There is no strategy involved here. When playing challenges legit, player doesn’t know what can be dropped from each chicken, killing things in correct order is just a matter of luck, nothing else. Player #1 gets Ion Blaster gift, and player #2 gets Ion Blaster and atomic powerup on top of that. How is that not a problem? Single atomic powerup is often worth huge amount of points on dailies. Comparing this to “letting chicken escape” is really inapropriate. You get ahead because of luck, not better/worse strategy.

What matters is that all players are given the same set of circumstances, or the same opportunities – and they are.

It doesn’t matter at all, as long as results can vary based on luck. (Here, based on the order you kill enemies in.) In gameplay itself, it isn’t that different from previous RNG system.

P.S. On second thought, we could alleviate the problem if we maintain separate limits for gifts and atoms, but it won’t eliminate it entirely (if 3 chickens are all chosen to drop gifts, then one gift will always be unable to spawn).

Easy fix (assuming that with BoggY we identified the problem correctly) would be to just make sure that no more than 2 chickens in a wave can drop powerups. (And that atomic powerup can be dropped after the gift, unlike now.)

In such scenario, if chicken #1 has atomic powerup assigned, and chicken #2 has Ion Blaster gift, no matter what order player kills them in, they will get both drops.

Yes, there’s no such strategy if you have no idea what will you face.

Congratulations! You found a bunch of assassin chicks!
In case of you don’t know, that’s a bug.
Here’s mine: 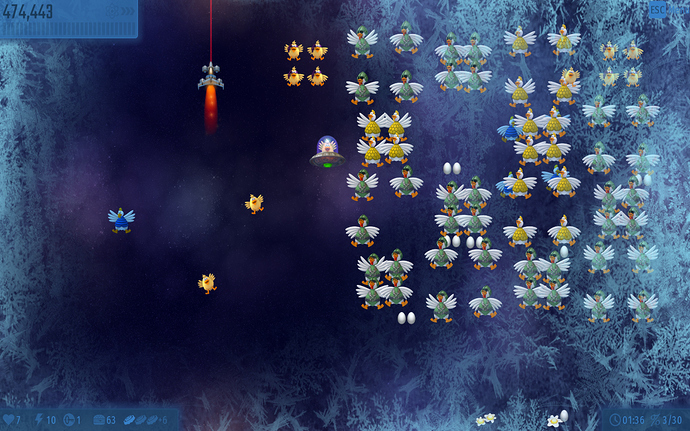 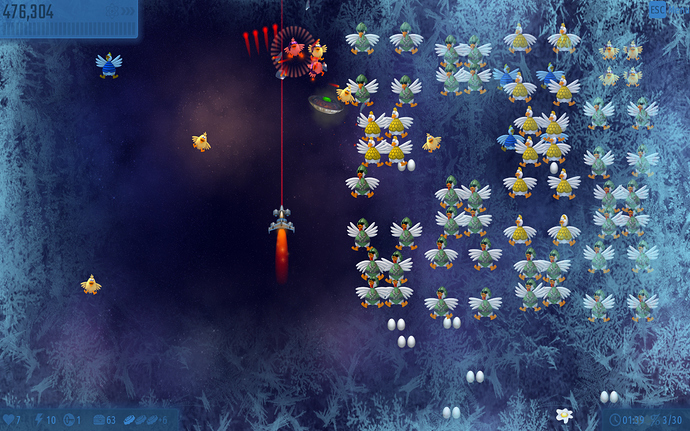 and it is not a bug

I don’t know what’s the bug there.

No they don’t. The bandanna now hangs to the other ſide, in reſponſe to complaints that they looked alike.

Do you want the assassins be more nightmarish?