Photon Swarm rework. The projectiles now have a homing ability. This was… difficult. Hopefully the result will be worth it. Further tweaking will be required in a 2nd pass – try it out!

Some anti-exploit measures: Removed a lot of the session-dependent randomness from missions. This means that if you disconnect and reconnect, you’ll still get exactly the same waves. Boss movement is now repeatable (e.g. UCO slams). ‘Usable’ equipment (e.g., Special Weapons, Poultry Payback, etc.) is now permanently lost after being used, even if you dis/reconnect. More to come.

A lot of other minor improvements. Check the full list below.

We’ll see about that.

Update description to include the homing ability? Also the “red glow when supercharge” part might be misleading now? 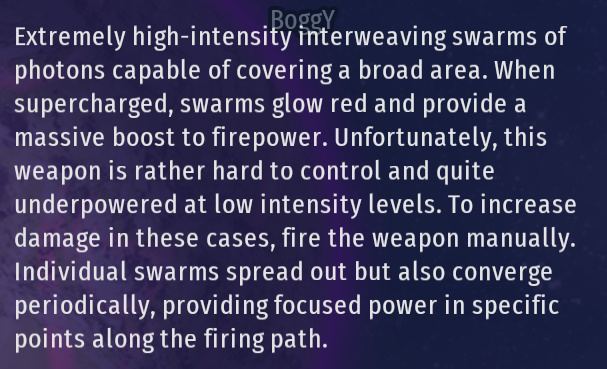 Photons don’t heat almost at all after picking up a firepower while autofiring, not sure if it’s only the transition from 8 to 9 fp though 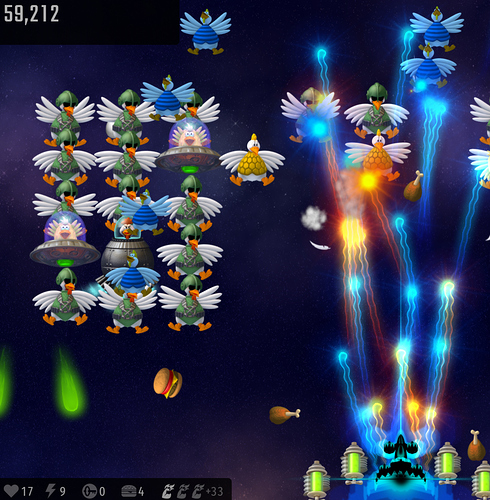 Other than that, the homing capability is rather weak (weak enough to entirely miss a target and go off-screen when it’s trying to home in on targets in some situations. Look at screenshot for example). Perhaps slow the projectiles down so that the homing capability can have more effect? (or make the homing capability stronger) At the same time, I think increasing the Normal Photon damage to 130 and Supercharged to 200 would be good. 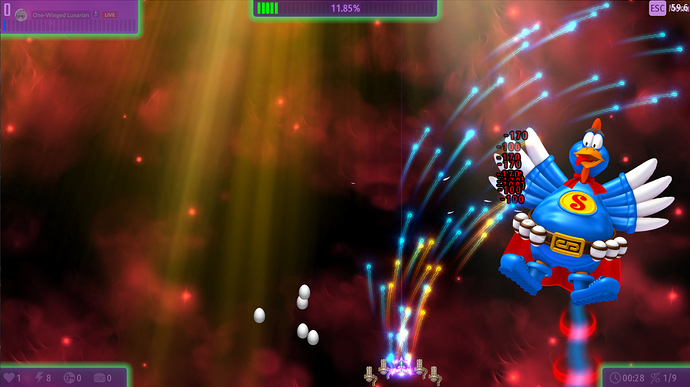 Also, a question: Do the photons home in on targets that will take no damage? If they do, I suggest adding 2 Straight Firing Photons to the front that do not home in on targets. Just so that there is something that can hit the intended targets in some situations.

Update description to include the homing ability

Well, rapid fractional firing rates such as these are very sensitive to your frame rate. I’ll have to rework the firing mechanism to avoid this. On the list. 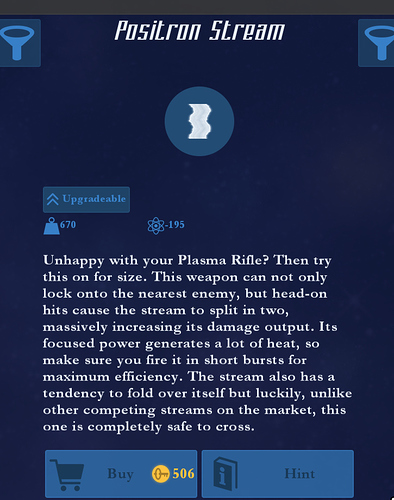 image725×919 183 KB
iA, can you change the positron’s description a little bit, since it got reworked? Also, the line “Its focused power generates a lot of hear, so make sure you fire it in short bursts for maximum efficiency” should be changed since now it takes more time for it to overheat when it’s stronger
InterAction_studios May 29, 2020, 4:23pm #13

This IS the new description. And, I don’t see any notes about Positron overheat rate having been changed. It’s the same as it always has been, is it not?

Not sure why, but previews for the CIU theme seem to be not working correctly (it’s just silence).
And yes, it happens with both versions.

EDIT: After playing a mission with the intense theme equipped
(or even just previewing it), going back to the map or the title screen doesn’t even play it anymore. Also noticed that, for the intense version at least, after this bug occurs it plays but only for a couple of seconds.

Update the description of ICBM as it now has 5 shots? 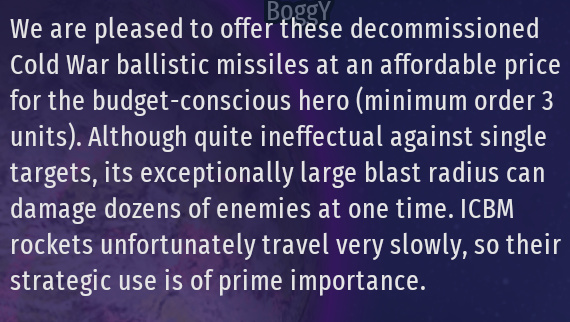 You mentioned only 5 shots, you should mention that it accelerates too.

It does say “minimum order”

Update the description of ICBM as it now has 5 shots

“minimum order” is supposed to mean the quantity per satellite, so…

For some reason, dark text combined with light-colored glows ends up being almost unrecognizable, yet the dark text affects everything else in the HUD except the score which is just fine. (the former only)